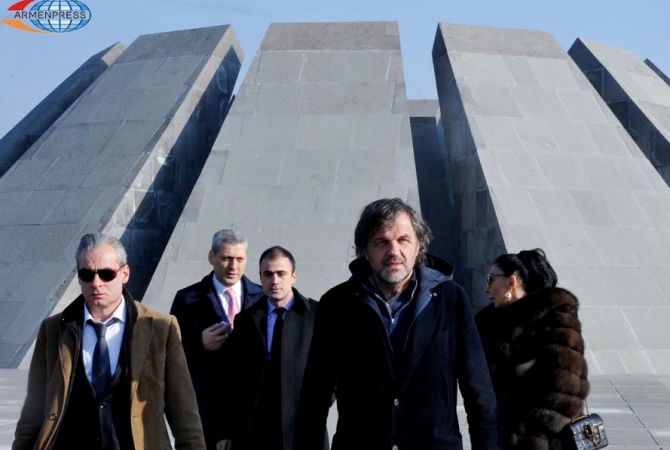 
YEREVAN, DECEMBER 25, ARMENPRESS. World-known filmmaker and musician Emir Kusturica honoured the memory of the victims of the Armenian Genocide in the Armenian Genocide memorial complex. “Armenpress” reports that the famous film director laid flowers at the eternal fire. He also watered his tree planted in the Memory Alley of Tsitsernakaberd.

The concert of Kusturica and “The No Smoking Orchestra” folk-rock band will be held at Karen Demirchyan Sports and Concerts Complex, Armenia on December 25. The concert is organized with the support of the state commission coordinating the events dedicated to the centennial of the Armenian Genocide and the Ministry of Diaspora of the Republic of Armenia. The concert is organized by Mezzo Production.

Kusturica is a winner of the Palme d'Or at Cannes. The genius of Balkan cinematography celebrated his 60th jubilee last year. Apart from being a filmmaker, he is also known as a member of “The No Smoking Orchestra” folk-rock band.