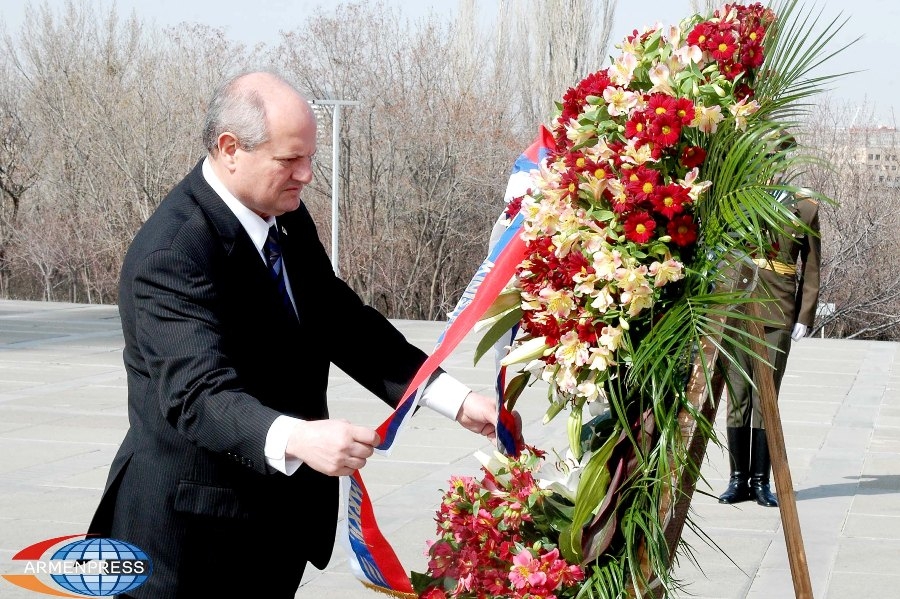 YEREVAN, MARCH 10, ARMENPRESS: The delegation, headed by the Minister of Foreign Affairs of Serbia Ivan Mrkić, on March 10 visited the Tsitsernakaberd Memorial. Armenpress reports that Ivan Mrkić laid a wreath at the Memorial and flowers at the Eternal Flame and commemorated the innocent victims of the Armenian Genocide with a minute of silence. The members of the Serbian delegation walked around in the Memorial Park, where Ivan Mrkić planted a tree.
Serbia has not yet recognized the fact of the Armenian Genocide officially. The fact of the Armenian Genocide by the Ottoman government has been documented, recognized, and affirmed in the form of media and eyewitness reports, laws, resolutions, and statements by many states and international organizations. The complete catalogue of all documents categorizing the 1915 wholesale massacre of the Armenian population in Ottoman Empire as a premeditated and thoroughly executed act of genocide, is extensive. Uruguay was the first country to officially recognize the Armenian Genocide in 1965. The massacres of the Armenian people were officially condemned and recognized as genocide in accordance with the international law by 42 out of 50 US States, France, Germany, Italy, Belgium, Netherlands, Switzerland, Sweden, Russia, Poland, Lithuania, Greece, Slovakia, Cyprus, Lebanon, Uruguay, Argentina, Venezuela, Chile, Canada, Vatican, and Australia.