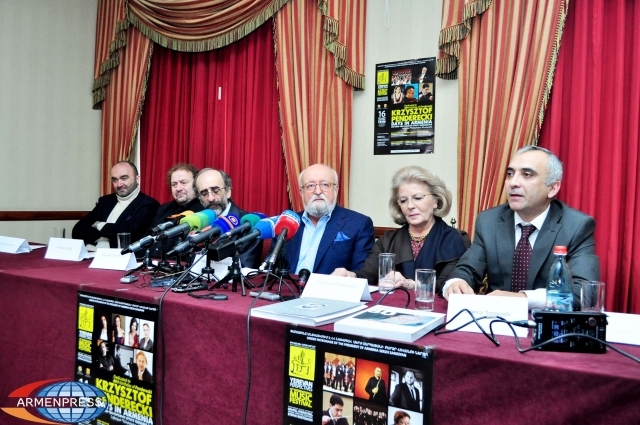 
YEREVAN, JANUARY 13, ARMENPRESS. The prominent Polish composer and conductor Krzysztof Penderecki visited Armenia. Armenia holds grandiose celebrations on the 80th birthday anniversary of the Polish music’s legend, who has Armenian origins. On the initiative of the “Yerevan Prospects” international festival a row of events will be held in Armenia under the following slogan: “Krzysztof Penderecki Days in Armenia”. “The Krzysztof Penderecki Days”, which are scheduled to be held on January 13-16, will herald the launch of the 15th jubilee season of the festival.

Krzysztof Penderecki expressed his gratitude for the invitation to the organizers of the festival and noted that he is glad to be in Armenia. Among other things Krzysztof Penderecki underscored: “This is already my third visit to Armenia. I remember all the other festival days held on a high level of performance in the presence of a wonderful audience. I am particularly impressed by “Hover” choir. I always enjoy coming back to Armenia. I am hopeful I’ll pay a visit to Armenia again. My grandmother was an Armenian. She came to Poland from Isfahan due to certain reasons. I used to go to Armenian Church in Kraków with her.”

In turn, Krzysztof Penderecki’s wife Elżbieta Penderecka stated: “We are closely connected with the Armenian community of Poland. We receive Armenian newspapers. I see an Armenian sight every time I look at my daughter.”

Advancing the 100th anniversary of the Armenian Genocide the prominent Polish composer is currently engaged in the creation of an Armenian choral work based on the Psalms.

Krzysztof Penderecki was born in Dębica on 23 November, 1933. He studied composition privately with Franciszek Skołyszewski and then (1955-8) with Artur Malawski and Stanisław Wiechowicz at the State Higher School of Music in Kraków, where he also taught, being appointed its rector (i.e., president) in 1972 (in the 1980s the School was renamed "Academy of Music). Penderecki's career had a very auspicious beginning. In 1959 he came suddenly to prominence when three of his works won first prizes in a national competition organized by the Polish Composers' Union (he submitted them under different pseudonyms). His reputation quickly spread abroad, notably through perfomances of such works as Anaklasis (written for the 1960 Donaueschigen Festival) and Threnody for the Victims of Hiroshima. The latter piece, as well as the Passion according to St. Luke of 1963-5, found an unusually wide audience for contemporary works, and Penderecki soon received important commissions from diverse organizations in Europe and the USA. He has also appeared widely as a lecturer and in 1972 began to conduct his own compositions.

Penderecki has won numerous domestic and foreign prizes including the First Class State Award (1968, 1983), the Polish Composers' Union Prize (1970), the Herder Prize (1977), the Sibelius Prize (1983), the Premio Lorenzo Magnifico (1985), the Israeli Karl Wolff Foundation Prize (1987), a Grammy Award (1988), a Grawemeyer Award (1992), and a UNESCO International Music Council Award (1993). He has honorary doctorates from universities in Rochester, Bordeaux, Leuven, Belgrade, Washington, Madrit, Poznań, Warsaw and Glasgow. He is an honorary member of the Royal Academy of Music in London, Accademia Nazionale di Santa Cecilia in Rome, Musikaliska Academien in Stockholm, Akademie der Kunste in Berlin, Academia Nacional de Bellas Artes in Buenos Aires, Academie Internationale de Philosophie et de I' Art in Bern, Academie Internationale des Sciences, Belles-lettres et Arts in Bordeaux, and the Royal Academy of Music in Dublin. In 1990 he received the Great Cross of Merit of the Order of Merit of the Federal Republic of Germany, in 1993 the Order of Cultural Merit (Monaco), and in 1994 an Austrian honorary distinction For Achievements in Science and Arts. In 1993 he was decorated with the Commander's Cross with the star of the Order of Polonia Restituta.

Penderecki's teaching career developed in Germany, the U.S. and Poland. He taught composition at the Volkwang Hochschule fur Music, Essen (from 1966 to 1968); in 1973-78 he lectured at Yale University in New Haven. In 1982-87 he was rector of the Academy of Music in Kraków, in 1987-1990 he served as the artistic director of the Cracow Philharmonic. Since his conductor's debut with the London Symphony Orchestra (1973), he has performed with prominent symphony orchestras in the United States and Europe, and he is chief guest conductor of the Norddeutscher Rundfunk Orchestra in Hamburg. Apart from his own works, his conducting repertoire covers the works of composers from various epochs, with a preference for 19th-century and early 20th-century compositions. In 1997 he published a book entitled "The Labyrinth of Time. Five Lectures at the End of the Century (Warsaw, "Presspublica"). In 1996 the performance of his piece Seven Gates of Jerusalem, commissioned by the city, commemorated the celebrations of "Jerusalem - 3000 Years." in Israel.