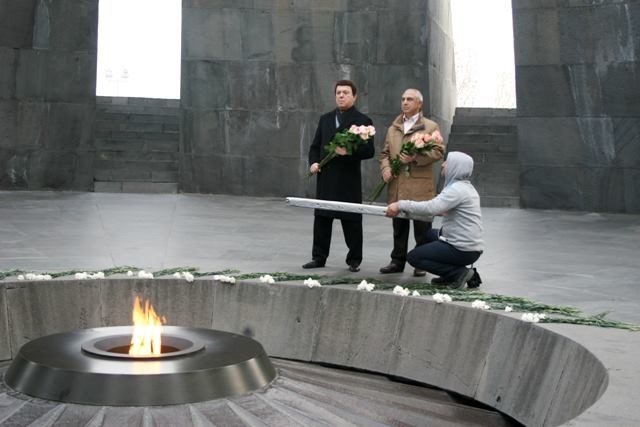 
YEREVAN, NOVEMBER 21, ARMENPRESS. People’s Artist of the USSR Joseph Kobzon is engaged in the activities of shooting a music video for his new song titled “My Armenia” near the unquenchable fire of the Tzitzernakaberd Memorial dedicated to the memory of the Armenian Genocide victims. “Armenpress” reports about this citing the facebook page of the Armenian Genocide Museum-Institute.

Iosif Kobzon is a Russian singer, known for his crooner style.

Kobzon was born to Jewish parents in the mining town of Chasiv Yar, in the Donbassregion of Ukraine.

As a boy he demonstrated a talent for singing, winning numerous regional singing contests. He reached the national finals on two separate occasions, appearing in concerts dedicated to Joseph Stalin - a significant honour at the time.

Despite his talent for singing, Kobzon went on to technical school to study geology and mining in Dnipropetrovsk, as this was considered a lucrative vocation in the Soviet Unionfollowing the Second World War. However, in 1959, following his 1956-1959 contact with professional music instructors in the Soviet Army where he was a member of the armies song and dance ensemble, he decided that music would be his preferred vocation.

In 1958, Kobzon officially started his singing career in Moscow, and enrolled to study at the Gnessin Institute. In the next few years he made valuable contacts in Moscow's entertainment world, and was eventually given a chance by composer Arkady Ostrovski to perform some of his music.

Initially, he performed in a duet with the tenor Viktor Kokhno, but was eventually offered a solo repertoire by many of the outstanding composers of the time such as Mark Fradkin, Alexander Dolukhanian and Yan Frenkel.

In 1962, he recorded his first LP which included songs written by Aleksandra Pakhmutova.

In 1964, he triumphed at the International Song Contest in Sopot, Poland, and in the following year he took part in the "Friendship" contest held across six nations, winning first prize in Warsaw, Berlin and Budapest.

His popularity rose quickly, and demand for his singing saw him frequently performing two to three concerts a day.

His most popular hit song at the time was titled "A u nas vo dvore".

During Leonid Brezhnev's time in office (1964–82), there was hardly an official concert where Kobzon did not take part, and in 1980 he was awarded the honour of People's Artist of the USSR.

In 1983, Kobzon was expelled from the Communist Party and reprimanded for "political short sightedness," after he performed Jewish songs during an international friendship concert, which resulted in the Arab delegations leaving in protest.

However, the following year, (1984) his reputation was restored, as he was honored with the USSR State Prize.

His best known song is "Instants" from the legendary Soviet TV series "Seventeen Instants of Spring" (1973).

Throughout his career, he has shared the stage with many Western superstars, including the likes of Liza Minnelli and Julio Iglesias.

In 1986, he was the first celebrity to visit and perform in the town of Chernobyl to cheer the nuclear reactor rescuers. Since then, Kobzon has performed on many occasions in disaster areas, and military hot-spots such as Afghanistan during the Soviet-Afghan war, and Chechnya.

Although, Joseph Kobzon officially ended his international touring career in 1997, he continues to appear in regular concerts before audiences around the world, and is frequently seen on Russian television to date.

Kobzon has a reputation for his readiness to help others. He has earned enormous respect amongst Russians for committing substantial sums of his personal wealth to help thousands of Russia's poor and unfortunate, including the funding of numerous orphanages around the country.

In 2002, Kobzon is noted for risking his life as the key negotiator in the Moscow theater hostage crisis. His bravery resulted in a mother with three children and a citizen of the United Kingdom being rescued.

Kobzon has been active in Russian politics, since 1989. He is probably the most experienced Russian MP, and also the one who gets reelected with the largest margin in the country's history. Between 2005 and 2007, he was the head of the State Duma's culture committee.

In 2009 he was bestowed the rare award of Honorary Citizen of Moscow, becoming the 24th individual ever to be so honoured, and sharing this status with people such as Pavel Tretyakov, Prince Vladimir Galitzine and Patriarch Alexy II of Moscow.

To honour his remarkable musical, political and humanitarian achievements, in 2003, there was a statue of Joseph Kobzon erected near his birthplace, in Donetsk, Ukraine. Such an honour to be bestowed during one's lifetime is considered to be highly unique by any nation's standards, and has cemented Kobzon's popularity as a "living legend".

In 2007 Joseph Kobzon's name was entered into the Official Book of Russian Records as the most decorated artist in the country's history.