Arthur Abraham is sure to win De Caroli 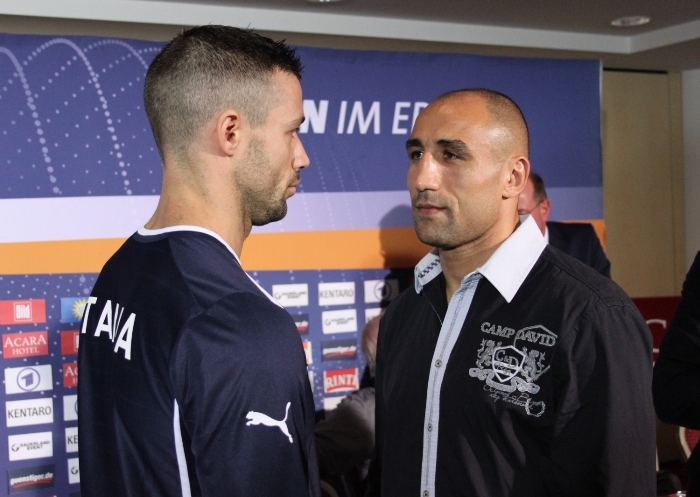 
YEREVAN, OCTOBER 23, ARMENPRESS. The former WBO World Boxing Champion Arthur Abraham will return to the ring on October 26.  The rival of our compatriot is Italian 29-year-old Giovanni De Carolis. The fight will take place in Oldenburg city of Germany.

As Armenpress was reported by Arthur Abraham’s press secretary Siran Grigoryan, Arthur Abraham stated that he will do his best to win in the coming fight. “No fight is easy. I do not underestimate Carolis, but I will be the winner,” pointed out Arthur Abraham.

Arthur Abraham was born on February 20, 1980, in Yerevan, Armenia to parents Grigor and Sylvia Abrahamyan. His little brother, Alexander, is also a professional boxer. He moved to Germany with his parents and brothers at the age of 15. He became a citizen of Germany in August 2006.

On 10 December 2005, in Leipzig, Germany, Abraham won the vacant IBF Middleweight title against Kingsley Ikeke by a 5th round knock-out. The IBF belt had previously been vacated by undisputed champion Jermain Taylor after a bout with Abraham was denied in October that year.

Abraham defeated Canadian Sébastien Demers by KO in the third round after two minutes and fifty-seven seconds. Abraham was clearly physically superior than his opponent. Arthur won his fifth title defense by defeating fellow Armenian Khoren Gevor by 11th round knockout from a powerful left hook.

On 8 December 2007, Abraham defeated Wayne Elcock to make his sixth title defense by technical knockout in the 5th round.

During two of his matches, Arthur Abraham was accompanied by live performances of the Scorpions and is currently accompanied by the track "Ready for The Fight" by The Young Punx.

On 29 March 2008, Abraham defeated American Elvin Ayala via 12th round KO after connecting with a devastating left hook that sent his opponent crashing to the canvas face first. This was Abraham's 7th successful title defense.

On 25 August 2012, Abraham won a twelve round unanimous decision over Robert Stieglitz to capture the WBO Super Middleweight Championship in a spectacular battle which made Abraham a two-division champion. Abraham became the second Armenian and the first German to win championships in two different divisions. The judges' scores were 116-112, 116-112 and 115-113. The bout took place in O2 World Arena, Berlin, Germany. Abraham was named best boxer of Germany in 2012 by BoxSport magazine. His coach Ulli Wegner was also named the best coach of the year.

Abraham defended his title against Mehdi Bouadla on December 15, 2012. He won via technical knockout in the eighth round.

A rematch with Stieglitz took place on March 23, 2013 in Stieglitz's home of Magdeburg, Sachsen-Anhalt, Germany. Abraham's eye rapidly swelled shut in the second round and he could soon no longer see. The referee waved him off at the start of the fourth round, resulting in his defeat.

When Wilberforce Shihepo began his professional career in 2003, he started out on a sour note, losing his professional debut against Sydwell Mokhoro. He would later get on track, winning six of his next seven bouts. In 2006, he got his first regional title shot against Stanyslav Kashtanov for the WBC Youth World Super Middleweight title. Unfortunately, Shihepo had to retire due to cuts he suffered during the fight. It was not until 2011 when Shihepo would get another opportunity for a title. This time it was for the interim WBO Africa Super Middleweight title. The “Black Mamba” would not disappoint this time. He won a technical decision over Donald Kampamba. Since capturing the WBO Africa Super Middleweight crown, Shihepo has made one defense of his title, and two successful non-title bouts. His most recent came against Jonas Olah. He stopped Jonas Olah of Hungary in the 1st round in a fight which took place in Offenburg, Germany – on 14th January 2012. This takes his fight record to (17-6-0). Wilberforce is trained and managed by Nestor Tobias – of Nestor Sunshine Boxing Academy.