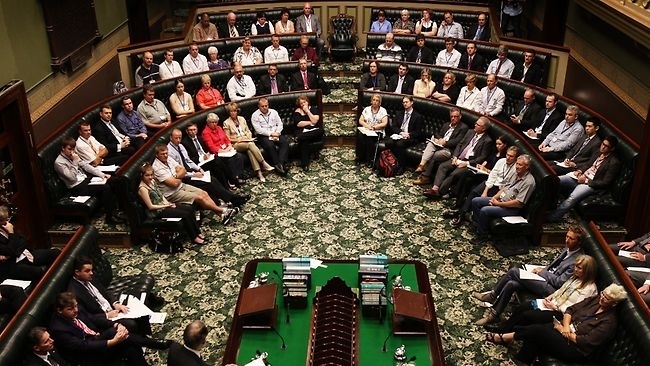 
YEREVAN, JULY 13, ARMENPRESS: The seven-member delegation of the Australia’s New South Wales Parliament is currently in Armenia. The visit has been initiated by the Armenian National Committee of Australia. “The key aim of the visit is to provide the parliament members, having quite a considerable contribution to the Armenian issue, with the opportunity to see Armenia, get acquainted with the centuries-old Armenian culture and history and upon their return to continue their pro-Armenian activities in Australia”, - stated the ANC Australia Executive Director Vache Kahramanian to Armenpress.

The delegation of the Australian parliamentarians, who arrived in Armenia on July 12, will stay in Armenia for seven days and will hold high-level meetings with the President of the Republic of Armenia Serzh Sargsyan, the President of the National Assembly Hovik Abrahamyan, the Prime Minister Tigran Sargsyan, as well as His Holiness Karekin II, the Supreme Patriarch and Catholicos of All Armenians. Issues related to the further strengthening of the Armenian-Australian cooperation will be discussed. The ANC Australia Executive Director Vache Kahramanian expressed his hope that the meetings will give a new impetus to the Armenian-Australian political, economic and cultural relations.

In May 2013 during the interview given to the SBS Radio Station broadcast in Australia, the Member of the New South Wales Legislative Council, Rev. Fred Nile touched upon the forthcoming visit to Armenia and stated that “he is very excited and hopes for warm reception”.

The largest state of Australia – New South Wales – on April 17 1997 adopted a motion condemning the massacres taking place in the Ottoman Empire, characterizing them as the first Genocide of the 20th century. On May 1 and June 8 2013 the Parliament adopted the motions on recognizing the genocides of the Assyrians and Greeks and the motion on re-establishing of the recognition of the Armenian Genocide.

On October 25th, 2012 the Legislative Council of New South Wales adopted a unanimous motion recognizing the Republic of Nagorno Karabakh and calling on the right to self-determination of its people. This historic motion was the first in Australia and the third internationally.