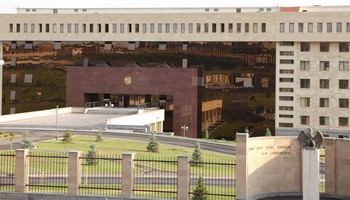 
Yerevan, August 14, ARMENPRESS: The Armenian armed forces recruitment mixed principle continues to be the main. As “Armenpress” reports the Armenian Minister of Defense Seyran Ohanyan noted about this during the meeting with the hawk participants on August 14.

To his word although all the states are rapidly moving towards the formation of professional armies, “however, because of our geographical conditions, we still take steps to expand the professional component and try to gradually increase the contractual service”.

“Officers, warrant officers, as well as professional sergeants and contract divisions are accounted in the professional staff”, the minister noted.

Touching upon the information about closing the Chambarak military unit, Seyran Ohanyan stressed that no unit is going to be closed. “We are just switching from the principle of mandatory term service into a principle of contractual recruitment services. It is particularly used in the border areas also solving social problems”, the minister briefed adding that such a system stopped a great number of people to leave their areas. “People have started to not only protect the border, their village, but also started to get engaged in agriculture”, Ohanyan mentioned.

As the Minister of Defense informed other structural changes are also being implemented in the system.