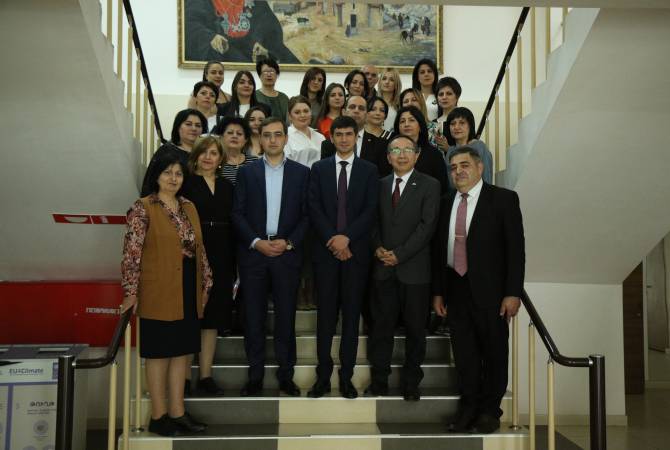 
YEREVAN, MAY 23, ARMENPRESS. The Embassy of China to Armenia is starting a new project aimed at contributing to the development and progress of provinces in education, tourism, trade and business sectors. The new project will start from Aragatsotn province.

Ambassador of China to Armenia Fan Yong said that they want to cooperate with all provinces of Armenia.

“I came to Armenia in November 2020. Due to the pandemic I didn’t manage to visit Armenia’s provinces, and this project is a wonderful opportunity to fill this gap. We started the project from Aragatsotn province and will continue developing the relations with the other provinces as well. We also want to present China more to the Armenian people, by translating books and implementing several events so that the Armenian people recognize and show more interest to China. We plan to talk to the Confucius Institute, present our today’s visit in N1 Basic School of Ashtarak so that they could cooperate and develop the field of education in Aragatsotn province”, the Ambassador said.

He noted that they also plan to develop tourism within the frames of the partnership with Armenia’s provinces, adding that they will try to do so that Chinese people better recognize Armenia.

“During our meeting today we discussed what goods exist in Aragatsotn province which the Chinese people would be interested in and what products could be exported to China”, the Ambassador said.

Governor of Aragatsotn province Sergey Movsisyan said the cooperation proposal has been made by the Embassy of China, which was accepted with pleasure.

“Our meeting today was very productive, and I hope that it will put a beginning to our cooperation in a number of areas. We discussed different topics with the Ambassador on starting cooperation both in education, culture and business sectors. We agreed to again meet and more substantively discuss in what format to introduce the teaching of Chinese in our schools, as well as we plan to hold China Days in Aragatsotn province. We also reached an agreement on the cooperation in the business field”, the Governor said.

Sergey Movsisyan said that during the meeting it was revealed that the Ambassador was very much interested in winemaking, and the province, he says, is very developed in this field as there are many entities engaged in wine production. “I think that at our next meeting we will much deeply discuss the issue of winemaking, which the Ambassador is interested in, and which is a very priority sector for us”, the Governor of Aragatsotn province said.