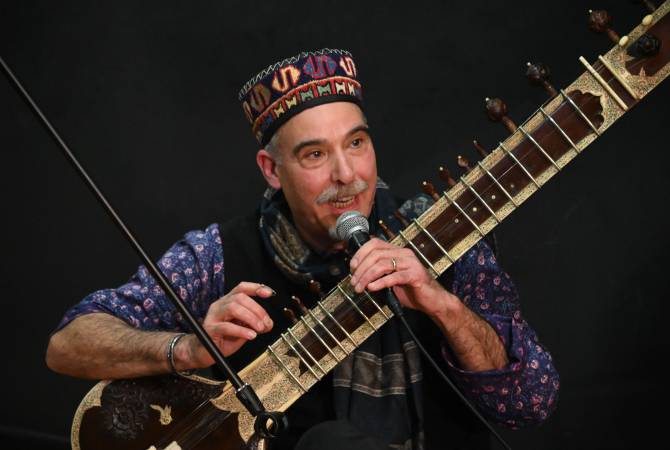 
YEREVAN, MARCH 24, ARMENPRESS. “RASAMANJARI”, which means Spring Blossom- a Gala Live In Concert will take place on March 31, at 19:00 in the Arno Babajanyan Concert Hall. The concert bearing the symbol of colourful spring will become a reality at the initiative of the Indian Embassy in Armenia, Indo-Armenian Friendship NGO and Indian Cultural Centre Armenia.

The featured artist of the evening is the internationally acclaimed Australian-Armenian musician Peter Davidian, whose roots are from Kolkata, India, but he lives in Australia. Peter's family moved to India from Iran, and so he was inspired to learn the Sitar, which he has mastered in the course of time.

Here is a small interview with Peter about his career and future plans:

1. How did you start your musical career ? Tell us about your journey as a musician.

I have studied music from the early age of 8, in formal lessons for melody and rhythm. I am proficient for Sitar, Guitar, Harmonium, Drumkit(Jazz etc), Darabuka and Tabla. First semi professional performance was at 12 years old and has continued for more than 50 years. I had intensive studies with Indian music professor Ustad Ghulam Qadir Khan of the Jaipur Gharana(school) throughout the 1980s for Sitar and Indian music theory.

I have been involved in numerous musical projects and events over the years. From Sitar recitals, world music projects, film soundtracks, studio recordings and education. I am also a composer with over 10 albums of recordings featuring Sitar, Indian, Armenian and western musical genres. Most recent albums are ‘Instrumentalism’, ‘Artsakh’ and ‘The Armenia Suite’.

Armenia is my motherland and as a result of diaspora I am the first to return in 3 generations, from Australia.  My family’s ancestors were from Julfa, Nachijevan until early 17th century. Then to New Julfa, Isfahan, Iran, where my grandparents were born. They, like many from New Julfa, went to India. Subsequently moving to Indonesia and then to Australia after 2nd World War in 1946.

I like so many things in Armenia. The very welcoming people, the food, the beautiful mountain landscapes, the ancient churches and monasteries, the music and dance. The art, the culture. From the first time I arrived in January 2019 I felt that I had returned home at last.

3. Has Armenian music impacted you as a musician?

Yes, definitely. The melodic structures, the rhythmic cycles, the scales used. The instruments that touch my heart immediately upon hearing. The works of Komitas, Sayat Nova, Khatchaturian and all the current superb instrumentalists and composers.

4. Tell us about your future plans.

To continue to strive to master the Sitar and further develop my understanding of Armenian and Indian music systems. As my great grand uncle was an Ashugh musician travelling from Isfahan/New Julfa I feel the music is deep in our family’s roots. There are many musicians in the younger generation of our large family in Australia.

For Sitar the 3 masters of 20th Century, Vilayat Khan, Nikhil Banerjee and of course Ravi Shankar.

Current living sitar master Shahid Parvez Khan is also a great inspiration.  I also admire the great musicians and composers of the Jazz and Classical genres.

6. What is unique about sitar?

Sitar is a medieval period instrument that was designed by Amir Khusroo. He took the Persian Setar, Caucasian Tar and the Indian Veena and blended them into a new design with resonating strings under the main playing strings. With raised curved fretboard the player can perform many different embellishment techniques to emulate the human voice. It’s resonant vibrating tone is quite hypnotic to both player and listener and is equally suited to slow meditative playing up to very fast Melodic structured improvisation.

Sitar has established itself as a preeminent instrument of North Indian, Hindustani, classical music.

7. Tell us about the upcoming concert.

The upcoming concert is part of the Indo Armenian Friendship NGO activities in Yerevan and Armenia. It will be a major event of Armenian and Indian music, song and dance. To be held on 31 March, from 7pm, at the Arno Babajayan Concert Hall on Abovyan St. Yerevan. I will be performing solo Sitar recital, duets with Indian Classical vocals, another duet with Armenian Bhul flute, and an ensemble, performing my ‘Armenia Suite’ compositions for Sitar, wind and traditional percussion.