Armenia FM: ‘For us, the Nagorno-Karabakh conflict is not a territorial issue, but a matter of rights.’ | ARMENPRESS Armenian News Agency

Armenia FM: ‘For us, the Nagorno-Karabakh conflict is not a territorial issue, but a matter of rights.’ 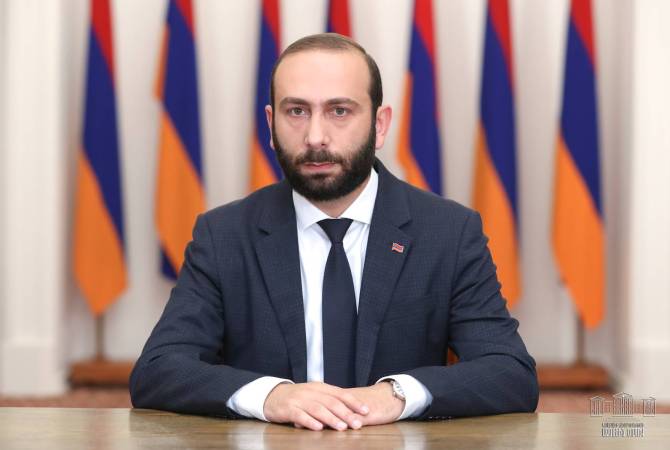 
YEREVAN, MARCH 15, ARMENPRESS. Minister of Foreign Affairs of Armenia Ararat Mirzoyan emphasizes that the negotiations on a peace treaty with Azerbaijan must be held without preconditions. The FM reminded that Armenia applied to the OSCE Minsk Group Co-Chairmanship to organise negotiations on the peace treaty.

In an interview with ARMENPRESS, FM Mirzoyan touched upon the 5 principles of a peace treaty which, according to Baku, were handed over to Yerevan.

ARMENPRESS: Yesterday, the Minister of Foreign Affairs of Azerbaijan publicised 5 principles of peace treaty, as they claim, which were handed over to Armenia. Was that the document passed to Armenia?

FM Ararat Mirzoyan: Yes, the Minister of Foreign Affairs of Azerbaijan publicly announced the proposals handed over to Armenia.  By the way, it is noteworthy that the letter dated February 21 was passed to the Armenian side only on March 10.

ARMENPRESS: What is the position of the Armenian side on the mentioned proposals?

FM Ararat Mirzoyan: First of all, it should be emphasised that every negotiation on a peace treaty must be held without preconditions.

As for the main proposals, the two countries, having signed the "Agreement on the Establishment of Cooperation of Independent States" on December 8, 1991, in fact have already recognized each other's territorial integrity and accepted that they have no territorial claims towards each other.

It should be noted that the provisions mentioned in the proposal do not fully reflect the whole agenda of the existing problems. It is vital for the Armenian side that the rights and freedoms of the Armenians of Artsakh are clearly guaranteed, and the status of Nagorno-Karabakh is finally clarified. For us, the Nagorno-Karabakh conflict is not a territorial issue, but a matter of rights.

As we have already informed, the Armenian side responded to the proposal of Azerbaijan in line with the already mentioned position.

ARMENPRESS: The proposals of Azerbaijan refer to the process of delimitation and demarcation between the two countries, as well as the unblocking of transport infrastructure in the region.  How are these processes going?

FM Ararat Mirzoyan: We believe that the agreements reached within the Trilateral Statements of November 9, 2020, January 11, 2021, and November 26, 2021, should be fully implemented, and we are consistent in this regard. As you know, we have even made comprehensive  proposals for the implementation of these agreements, such as the proposal to launch a delimitation process through the mirrored withdrawal of troops and the introduction of an international monitoring mechanism, which, however, was rejected by the Azerbaijani side.

ARMENPRESS: What format do you see the possible negotiations on a peace treaty within?

FM Ararat Mirzoyan: Earlier, the Foreign Ministry of Armenia stated that it had applied to the OSCE Minsk Group Co-Chairmanship to organise negotiations on a peace treaty on the basis of the UN Charter, the International Covenant on Civil and Political Rights, and the Helsinki Final Act.