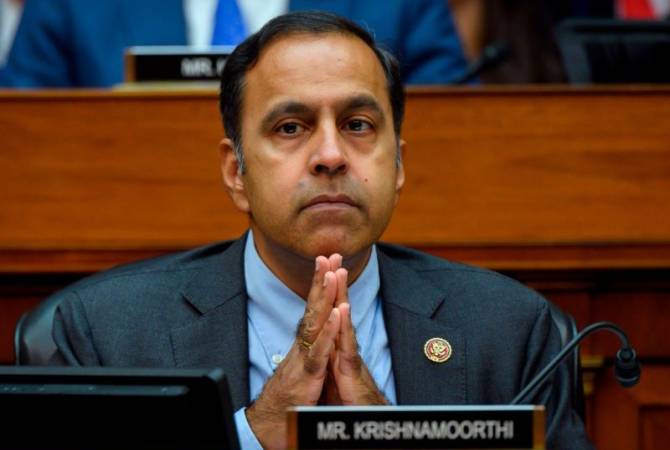 
YEREVAN, FEBRUARY 5, ARMENPRESS. The ANCA and ANCA Eastern Region join with the Armenian National Committee of Illinois - ANC of IL and Armenian Americans across the Prairie State in thanking Congressman Raja Krishnamoorthi (IL-8th District) for condemning Azerbaijan's brutal attacks against Armenian civilians in Sumgait, Baku, Kirovabad, and Maragha and demanding accountability for their crimes, ARMENPRESS was infomred from the Facebook page of the ANCA. In a powerful statement in the Congressional Record on February 3rd, Rep. Krishnamoorthi went on to "condemn Azerbaijan's ongoing aggression against Armenia, and call on the Azerbaijani government to immediately and unconditionally release all Armenian POWs and captive civilians."

"Mr. KRISHNAMOORTHI. Madam Speaker, today I rise to condemn the violence inflicted upon Armenians on the 34th anniversary of the Sumgait Pogroms in Azerbaijan. I believe that condemning these actions today will help prevent renewed aggression against citizens of Armenian descent who continue to live in Azerbaijan, while bringing attention to efforts to erase these atrocities from our collective memory. Further, I reaffirm our nation's commitment to an enduring, peaceful, and democratic resolution of the Artsakh conflict.

From 1988 to 1990, the Armenian population in Soviet Azerbaijan was the target of ethnically targeted pogroms in the cities of Sumgait, Kirovabad, and Baku. Beginning on February 27, 1988 in Sumgait, Armenian Christians were indiscriminately murdered, raped, and maimed by mobs of criminals and thugs. According to independent reporting, police in Baku allowed the pogroms to continue for 3 days, during which lime Armenians were burned alive and thrown from windows,

Despite vocal U.S. and international protests over the Sumgait Pogroms, renewed anti-Armenian pogroms were launched in Kirovabad on November 21, 1988 that lasted for seven days. Fourteen months later in the capital,Baku, another pogrom was launched against its Armenian minority. These vicious attacks killed hundreds of unarmed civilians and displaced tens of thousands of Armenians fleeing systematic violence as refugees.

These pogroms set the stage for decades of aggression by Azerbaijan. In September 2020, Azerbaijan bombed the Republic of Artsakh with Turkish support, targeting Armenian schools and religious sites, and killing innocent civilians. Over a year later, Azerbaijan still illegally holds and tortures Armenian prisoners of war (POWs) from 2020, despite signing a joint statement requiring all captives to be released.

Madam Speaker, on this 34th anniversary of the Sumgait Pogroms, I want to emphasize the importance of remembering these crimes against humanity. I call on the Azerbaijani government to acknowledge that these atrocities occurred, and that it seeks justice for the victims by prosecuting those who committed these horrific acts of violence. I also call upon the government of Azerbaijan to take all appropriate action to prevent further tragedies of this nature, and to respect the rights of all minorities living within its borders. I condemn Azerbaijan's ongoing aggression against Armenia, and call on the Azerbaijani government to immediately and unconditionally release all Armenian POWs and captive civilians".