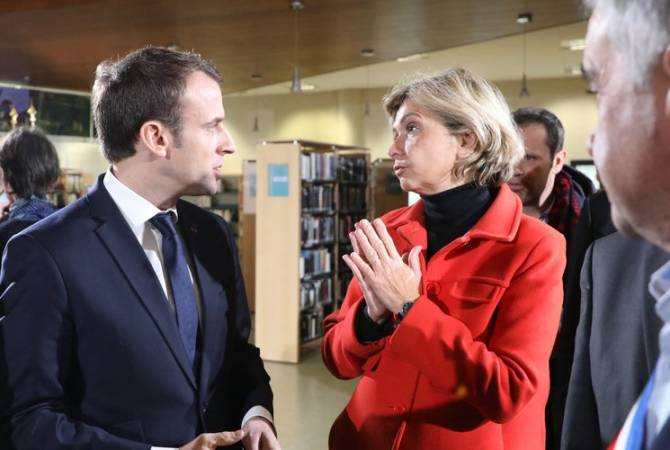 
YEREVAN, JANUARY 17, ARMENPRESS. Several French lawmakers are calling on President Emmanuel Macron to demand an apology from Azerbaijani President Ilham Aliyev for the latter’s threats against Valérie Pécresse, the President of the Regional Council of France’s Île-de-France and a candidate for the French presidency who visited Armenia and Artsakh in December 2021.

Particularly, the Azeri leader said at a news conference on January 12: “If we’d known about Valérie Pécresse’s illegal visit to [Nagorno Karabakh], we would not have allowed her to leave.”

President of The Republicans group (LR) in the French Senate Bruno Retailleau, LR MP of the National Assembly Damien Abad and Member of the European Parliament Francois Xavier Bellamy and 242 other politicians and public figures addressed an open letter to President Macron published in the January 15 Sunday edition of the Le Journal du Dimanche weekly, calling on the French president to demand an apology from Aliyev for his threatening remarks against Pécresse, who is the LR’s candidate for the French presidency in the upcoming election.

“These scandalous remarks cannot remain unanswered from France,” the lawmakers said in the open letter. “For a simple reason: these remarks not only constitute hate speech against a French politician, the President of the region of Île-de-France and a candidate for the French presidency, but are also an overt threat against the French people, the French government and its representatives, taking into account our country’s relations with Armenia. Honorable Mr. President, can you tolerate the government of any other state prohibiting the representatives elected by the French people from traveling to a territory – which, doesn’t belong to the given state – and to threaten to encroach against their liberties, up to their physical safety? As unpleasant as it may be for President Aliyev, the people of France are free, and France is a sovereign state. France cannot find any threat to be acceptable, it should not give in to any terror. And moreover when this is done by a dictator who calls Armenians ‘dogs’, who deployed prohibited munitions and jihadist mercenaries during the conflict with Armenia and who has always been a low example of human dignity. Thus, Mr. President, we are asking you, to demand on behalf of France that Azerbaijan issues a formal apology, and if this isn’t done in the shortest timeframes we demand to recall the French ambassador from Azerbaijan. This is a matter of France’s honor as much it is of France’s values. This is also a matter of support towards the Armenian people which we are obliged to provide at times when the Armenian people, despite Azerbaijani military aggressions, provocations and humiliations, stand tall and with dignity in these trials. France’s attitude must be worthy for the example of Armenia which is going through suffering, which causes admiration” reads the letter to Macron.