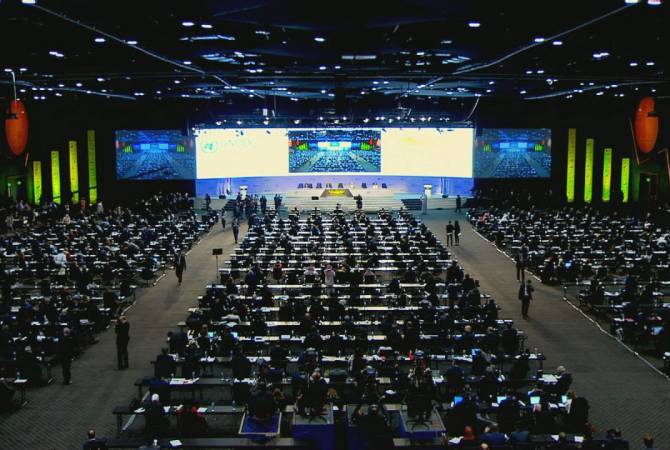 
YEREVAN, DECEMBER 14, ARMENPRESS. During the 9th session of the UN Convention against Corruption, held on December 13-17 in Sharm el-Sheikh (Egypt), the Azerbaijani delegation decided to abuse the platform and, instead of touching upon the manifestations of rampant corruption in their own country, began to discredit Armenia, Artsakh and Armenian organizations and individuals of the diaspora.

ARMENPRESS reports, the purpose of the event entitled "Misuse of fund raising activities for corruption and related criminal purposes", organized by the Azerbaijani delegation, was to designate Armenian organizations as institutions financing terrorism and to present the realization of the right of the people of Artsakh to self-determination as separatism and terrorism.

In order to give legitimacy to the event, the Azerbaijani delegation decided to use the United Nations Office on Drugs and Crime (UNODC) in its political speculations, inviting UNODC representatives to take part in the thematic discussion as speakers. In addition, without permission from the UNODC Secretariat, Azerbaijan used the structure's logo on the event materials to try to create the impression that UNODC and the 9th session of the UN Convention against Corruption are co-organizers of the event.

After the speeches of the other speakers invited to the event, a member of the Armenian delegation, Consul of Armenia in Egypt Rafayel Movsesyan took the floor, strongly criticized the anti-Armenian event organized by Azerbaijan and demanded that Azerbaijan stop hate propaganda against famous Armenian organizations and figures who tried to draw the attention of the international community to the violence against the civilian population of Artsakh, crimes against humanity, violations of international humanitarian law, the destruction of the Armenian cultural and religious heritage during the war in 2020 and the humanitarian crisis created as a result of the aggression of Azerbaijan. He reminded Azerbaijan of the December 7 decision of the UN International Court of Justice on interim measures on Azerbaijan, which requires Azerbaijan to take steps to stop propaganda of racial hatred and discrimination against persons of Armenian descent, including by officials and state institutions.

A very limited number of foreigners physically participated in the meeting, who left the hall immediately after the speech of the Armenian delegation.