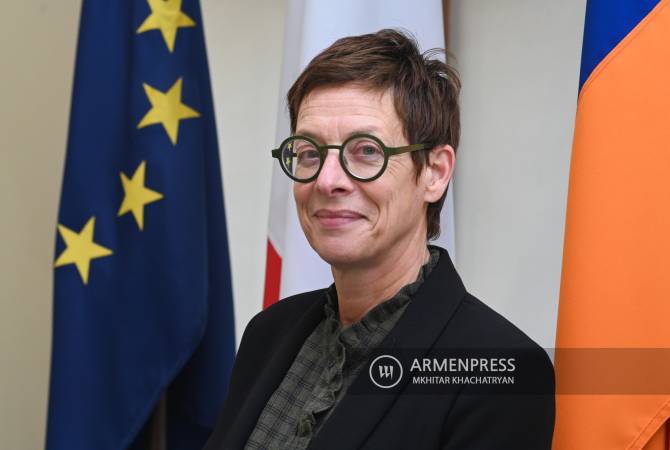 
YEREVAN, NOVEMBER 2, ARMENPRESS. France’s new Ambassador to Armenia Anne Louyot says her goal is to make the cooperation between the two countries in different areas more long-term. She hopes that the OSCE Minsk Group will help to achieve lasting stability in the Nagorno Karabakh conflict. The Ambassador notes that France attaches importance to taking humanitarian measures and returning the Armenian captives from Azerbaijan.

Anne Louyot gave an interview to ARMENPRESS about these topics.

-Mrs. Louyot, you have recently assumed office in Armenia. What are your impressions from our country and what actions do you see that must be taken during your mission?

-Thank you ARMENPRESS for the opportunity to give an interview. Of course, this appointment in Armenia is a great happiness and honor for me, as Armenia is France’s great friend in general and in the region in particular. From the first moments since I came here, I noticed the high level of the bilateral relations from the warm welcome I received here. And I am committed to further deepening the Armenian-French relations.

-Armenia and France cooperate in different areas. What successful programs would you mention and what kind of new projects are expected in the future? As an Ambassador, how do you imagine your activity for further deepening the bilateral relations and cooperation in different fields?

-Following the difficult period Armenia faced last year, France is more engaged here in humanitarian programs. There have been 8 important projects which provided urgent aid to the population mostly affected by the military operations. As you know, French President Emmanuel Macron has expressed his solidarity to the Armenian people. And France, the French people, have been mobilized for assisting Armenia. Programs were implemented with both different associations, organizations, local self-government bodies, as well as at a state level. Now my goal is to make this more long-term, carry out more long-term cooperation programs with the Armenian authorities. During my talk with Armenian Prime Minister Nikol Pashinyan , he said that the economic development is a priority for Armenia in order to consolidate the country and ensure future for the Armenian youth. This is also the desire of France, and our governments work together in order to introduce ambitious cooperation programs in economic sector both at bilateral and within the EU framework. You know that many important French companies, such as Veolia, Carfour, Amundi and Perno-Ricard, operate in Armenia. The purpose is to develop the economic cooperation, investments, have cooperation programs in the fields of sustainable development, green and high technologies. For instance, water, waste processing are areas where France can share its experience. Another important field is the healthcare. It becomes further important given that the coronavirus cases are growing in Armenia. And the French President has assumed a commitment to provide vaccines to Armenia. But there are also other healthcare programs around which we want to deepen our cooperation. There is already a very active cooperation between hospitals, the talk concerns the hospitals of Paris and Lyon which are cooperating with Armenian hospitals.

I would like to mention also two other sectors which are very important for cooperation. The education sector which is a priority for the Armenian government. There are already successful programs in this sector, such as the French university, the French-Armenian professional education center, the Lycée Français Anatole France and the Alliance Française. We want to have new cooperation programs in education sector. Cooperating with our Armenian partners with these projects we want to further contribute to the spread of French in Armenia. We must not forget that Armenia is a member of the International Organization of La Francophonie. Of course, there are many other fields which we want and can develop the cooperation. But now I would like to mention the cooperation in the heritage field. Here the partnership can be reflected in two forms – educational programs for specialists dealing with heritage preservation, and the restoration of the Armenian heritage. Those are the main areas where I would like to further strengthen the Armenian-French cooperation.

-Mrs. Ambassador, you talked about the statement of the French President on donating vaccines to Armenia. What vaccines the statement is about and when will they be delivered to Armenia? In august 2021, President Macron announced that France will donate 200,000 doses of COVID-19 vaccine to Armenia.

-The talk is about either Moderna or Pfizer vaccines. We will inform when we know the date of the delivery. 50,000 doses of other types of vaccines have already been sent to Armenia by France. And the second delivery is already at a preparation stage. It’s still unknown how many doses it would be, but the talk is about quite a large quantity.

-France is an OSCE Minsk Group Co-Chair country, and you are the representative of the Co-Chair country in Armenia. A year has passed since the war Azerbaijan launched against Nagorno Karabakh, but Baku still refuses to return all Armenian prisoners of war and civilian captives despite the commitments assumed by the November 9 trilateral statement. What role France can play on this matter as a Co-Chair country, for forcing Azerbaijan to return the captives? In your opinion, what actions must the OSCE Minsk Group and the international community take on this matter?

-Of course, I am aware of this painful situation. And of course, France is among those countries who wish taking humanitarian measures, reducing tension and releasing the persons held. Not me or my colleagues, the French Ambassador in Azerbaijan, follow this topic, there is a separate Ambassador, who is France’s co-chair in the Minsk Group and who follows and deals with this issue. We are happy that the Armenian Prime Minister and Foreign Minister reaffirmed the importance of the role of the Minsk Group in solving this situation. We are also happy for the recent meeting of the foreign ministers of the two countries in New York on the sidelines of the UN General Assembly. And the Minsk Group is working with the sides in order to take new actions in this dialogue process. As the Ambassador of France to Armenia, I hope that the Minsk Group will help the sides to record progress for the long-term stabilization of the situation.

-You mentioned earlier in one of your interviews that France is working with Russia and the United States on signing a lasting agreement over Karabakh. Can you please specify what kind of an agreement the talk is about?

-Perhaps I didn’t state my words very clearly that time. The talk, of course, was about the efforts of the Minsk Group Co-Chairs and the Co-Chair countries so that they accompany the sides in the settlement process.

-But is any concrete document being prepared?

-Azerbaijan claims that the Nagorno Karabakh conflict has been solved, whereas the status of Karabakh, the issue of the Artsakh people’s right to self-determination are still unresolved. Thus, Armenia claims that the conflict is not solved. What is France’s position on this matter?

-I would like to state once again that I am not the representative, the co-chair of France in the Minsk Group. And therefore, these are not the topics over which I have a direct authority. The only thing I can say is that I am fully aware and understand what an impact this situation has on the people of Armenia. I hope that all the diplomatic efforts being made will soon give results.

-As you said, you are not the representative of the Minsk Group and are not dealing with this issue directly, but I would like to address my last question on this topic. Till today the incidents provoked by Azerbaijan hinder to start the demarcation and delimitation works on the Armenian-Azerbaijani border. What is your assessment to such behavior of the Azerbaijani side and how do you see the solution of the issue?

-Of course, France thinks that it’s important to achieve the border demarcation and delimitation. And we, as well as the international community call for making these processes in a peaceful way. It’s obvious that the establishment of a peaceful context will enable to more quickly conduct the demarcation and delimitation works. And of course, this is my wish on this matter.

-Earlier reports were spreading that French President Emmanuel Macron will pay a visit to Armenia. What details can you provide? Is a presidential visit to Armenia planned in the future or not?

-The President will be very happy to visit Armenia. As he has stated for several occasions, he has great connection with Armenia and Armenians. And he has a plan to visit Armenia, but at this moment the dates are not known.