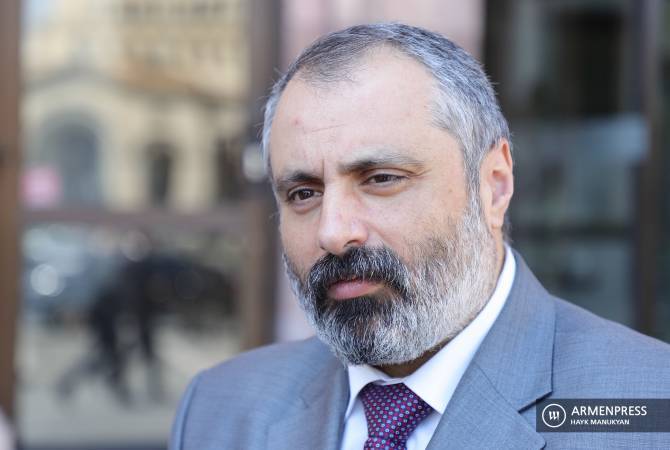 
YEREVAN, OCTOBER 15, ARMENPRESS. After the shootings in Artsakh this evening, the situation is calm, it is completely controlled by the Artsakh Defense Army and the Russian peacekeepers, the Artsakh Defense Army has no casualties, and the lives of the wounded soldiers are not in danger, Foreign Minister of Artsakh Davit Babayan told ARMENPRESS, urging the Armenian people not to give in to the misinformation or unchecked information and to follow exclusively official information, particularly, the press releases of the Defense Army, since exaggerated information having nothing in common with the reality is being spread.

“At this moment, thank God, we have no victims, the doctors are doing everything possible to ensure no risk to the lives of the wounded servicemen.. The general situation is stable now. The peacekeepers are also dealing with that issue, they came to the scene immediately, that is, there is no reason for panic," Artsakh’s Foreign Minister told Armenpress.

According to Davit Babayan, today's incidents took place near Norshen community of Martuni region of Artsakh. Answering the question of what size and scale the Artsakh-Azerbaijani clashes were, whether there is a danger of escalation of tension, Davit Babayan answered that at the moment the situation is fully under control. Babayan does not think that the incident can escalate into a large-scale war. “It’s impossible as long as Russian peacekeepers are standing there. We should understand this very well, and avoid spreading panic. War is impossible. And we must understand that it is a provocation by the enemy, and they will resort to such provocations again, because this is their style. This is not something new for us”, Davit Babayan said, adding that this new provocation of the Azerbaiajni side pursued not just a political, but geopolitical goals. He clarified that Azerbaijan’s acts are directed against both Russia and Armenians.

19:52, 06.24.2022
2475 views The Chinese Ambassador to Armenia attaches importance to cooperation with Shirak Province in various fields