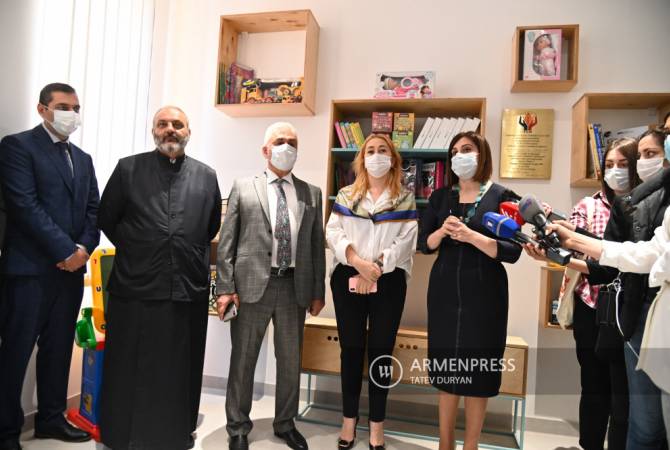 
YEREVAN, SEPTEMBER 28, ARMENPRESS. The first Pediatric Palliative Care Clinic in Armenia was opened today at the R. Yolyan Center of Hematology in Yerevan.

The clinic was initiated and funded by the City of Smile Charitable Foundation.

R. Yolyan Center of Hematology Director Samvel Danielyan said that they needed the clinic for decades.

“When the patient was staying in the department with 30 other patients it was difficult to organize palliative care, while home treatment was complicating the issue even more because of other children living in the home. Now, the Pediatric Palliative Care Clinic is opening, and it is very important for us,” he said.

Bishop Bagrat Galstanyan, the President of the Board of Trustees of City of Smile and Prelate of the Diocese of Tavush of the Armenian Apostolic Church, thanked everyone who participated in the creation of the clinic. He described the clinic as a “pain management center”, which will be a big support for cancer patients.

City of Smile Executive Director Esther Demirchyan spoke about the importance of the clinic, noting: “We were impatiently waiting for the opening, but due to some circumstances, namely the coronavirus and the 2020 Artsakh war, the opening was delayed. By cooperating with one of the leading clinics of the world and seeing their palliative care center we realized that we really needed to have such a center in Armenia as well.”

Healthcare Minister Anahit Avanesyan was also in attendance of the inauguration. “There are cases when even the best doctors are powerless to do anything. What matters is that all children and adults be surrounded with care and their loved ones until the end. Having this kind of a center is extremely important,” she said.

Bishop Galstanyan then delivered a prayer.