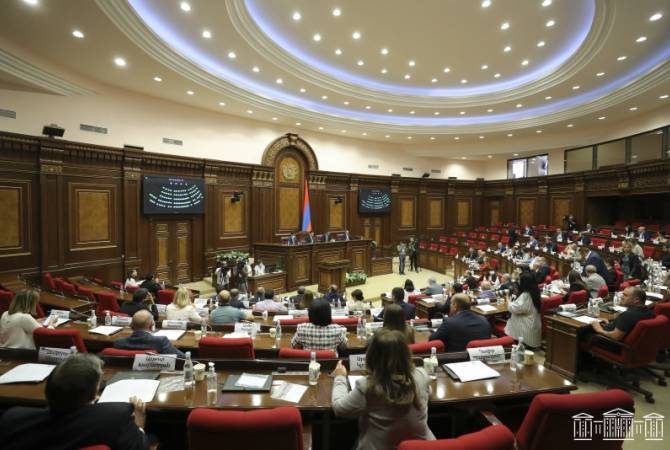 
YEREVAN, SEPTEMBER 24, ARMENPRESS. The government-authored bill on community enlargement passed first reading in parliament with only 59 lawmakers voting in favor, 0 against and 0 present.

The two opposition blocs, Hayastan and Pativ Unem, boycotted the session and didn’t participate in the voting.

The opposition argues that the items on the agenda – pertaining to the community enlargement process whereby a number of towns, cities and villages will be incorporated into merged municipalities – are unlawful and contradict the constitution.

Hayastan bloc secretary Artsvik Minasyan said in his speech earlier that they demand the President Armen Sarkissian to focus on the matter and dispute the issue.

Pativ Unem secretary Hayk Mamijanyan accused the pro-government bill in seeking to “remove politically undesirable mayors from office”. “By joining Hayastan bloc’s proposals, Pativ Unem bloc will likewise not participate in the debates of this item,” he said.

The lawmakers of both blocs then left the session before the debate.

The bill seeks to merge 441 communities into 37 enlarged communities. The government says that the current administrative divisions hinder community development, especially in cases of communities which have a population below 3000.