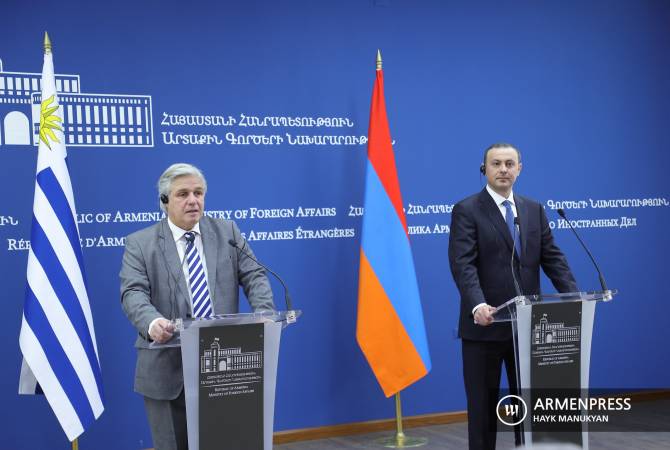 
YEREVAN, AUGUST 16, ARMENPRESS. The Armenian and Uruguayan foreign ministers were pleased to note during their meeting in Yerevan that relations between the two countries are developing dynamically.

“Mutual-visits, various level contacts both bilaterally and multilaterally are frequent,” acting Armenian FM Armen Grigoryan said at a joint press conference with Uruguay’s FM Francisco Bustillo. “We are closely cooperating in international organizations and our viewpoints over important issues of the global agenda are mostly coinciding,” Grigoryan said.

He added that inter-parliamentary relations have traditionally been active.

“During our conversation we attached importance to the activities of parliamentary friendship groups of the two countries,” Grigoryan added.

Grigoryan and Bustillo concurred that a great untapped potential for economic cooperation exists.

“We plan to take practical steps to boost cooperation in areas of interest. I would especially point out the sectors of IT, banking, water resource management and renewable energy,” Grigoryan said, adding that his Uruguayan counterpart will have a number of meetings over economic partnership development.

The Armenian acting foreign minister reminded about the visa-free regime between Armenia and Uruguay, noting that this is an additional tool for boosting business and tourism.