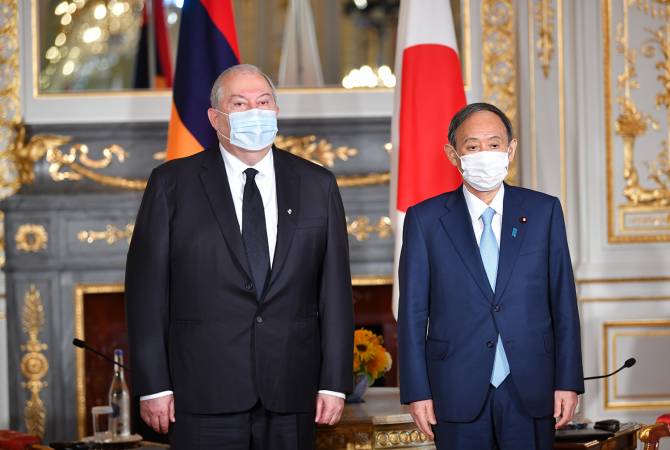 The Japanese PM welcomed the Armenian President’s visit to Tokyo and thanked for the participation to the opening ceremony of the Summer Olympic Games.

President Sarkissian congratulated the Japanese PM for the successful organization and holding of the Games despite the pandemic and stated that he is impressed by the opening ceremony and its high level of organization.

The Armenian President and the Japanese PM touched upon the bilateral agenda and the opportunities of deepening the ties. They noted that there is a great potential for expanding the commercial relations, however, added that it is not fully utilized.

President Armen Sarkissian said Armenia is interested in expanding the relations with Japan. He noted that Armenia, being an EAEU member, can serve a base for the entry of Japanese companies to the markets of the Eurasian states with its stable financial-banking system, as well as the Japanese companies can be engaged into different ongoing projects in Armenia, in particular the ones which are launching by the financial support of the European Union.

President Sarkissian highlighted the cooperation with Japanese companies in innovation, food safety, high technologies, artificial intelligence areas. Introducing the presidential initiative ATOM (Advanced Tomorrow) for science and technology development in Armenia, Armen Sarkissian said he would be happy for the cooperation with Japanese companies under this initiative and the implementation of joint programs. For this purpose, he said, he is going to meet with the executives of Mitsubishi Heavy Industries to discuss the cooperation opportunities.

The President also touched upon the cooperation in the field of environment and the importance of a joint program for improving the environment of Lake Sevan.

Armen Sarkissian thanked the government of Japan for the support and grant programs provided to Armenia in various areas.

The sides emphasized the importance of giving a new quality to the relations and opening a new page for cooperation.

The meeting also touched upon the multilateral cooperation and partnership in international organizations.