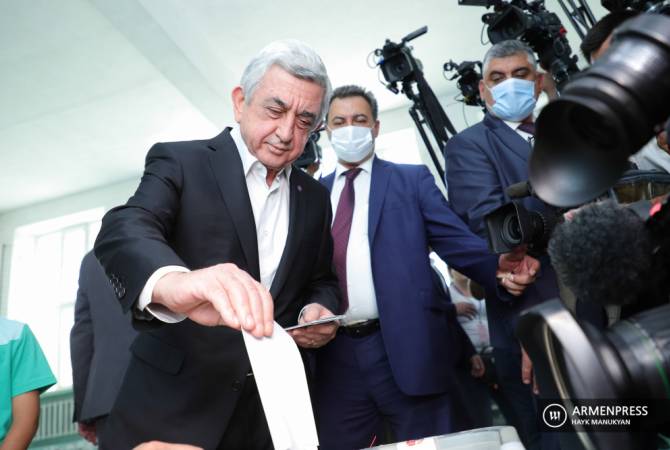 
YEREVAN, JUNE 20, ARMENPRESS. 3rd President of Armenia Serzh Sargsyan cast his vote in the early election of parliament on June 20 at 29/45 polling station in Dzoraghbyur.

He said he has made his choice back 33 years ago, adding that today as well his attitude has not changed.

“I voted for secure, sovereign, economically developed Republics of Armenia and Artsakh, for powerful Armenian Army, for the inviolability of our borders and for the reconciliation of our society”, Serzh Sargsyan said, highlighting solving the issue of the division among the society. He said in divided society nothing can be achieved, neither security nor economic progress.

He said their alliance “I Have the Honor” is closely following all the developments and will make an interim statement in the second half of the day.

“These elections differ from the previous ones greatly, and now making predictions about the chances is an ungrateful act. We will talk about these issues after the results of the elections”, the former President said.

One of the Georgian media outlets, which covers the elections, asked Serzh Sargsyan about his views on the further development of the Armenian-Georgian relations. In response, Mr. Sargsyan said in fact it’s difficult to find countries in the world which have lived side by side for millennia and have not run serious wars against each other. “We need to understand this and develop”, he said.