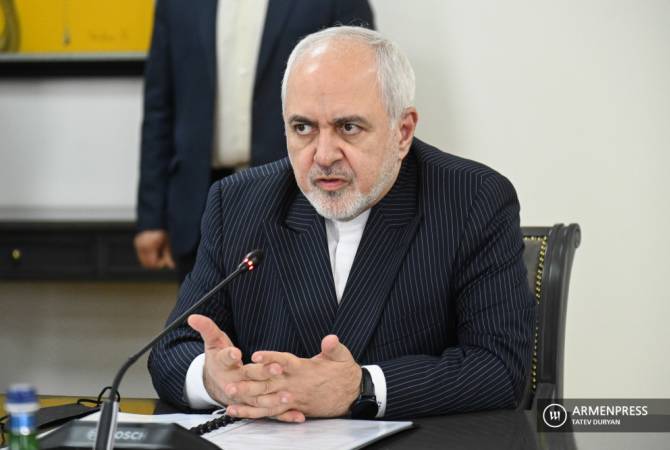 
YEREVAN, MAY 26, ARMENPRESS. Iran is concerned over the escalations on the Armenian-Azerbaijani border happening in the past two weeks and hopes that the situation will have a peaceful solution, Foreign Minister Mohammad Javad Zarif said during the meeting with Armenia’s caretaker Foreign Minister Ara Aivazian in Yerevan on May 26.

“We are very concerned over the escalations of the past two weeks. We have warned to show restraint. The main purpose of this visit is for me to be useful in solving such escalations. Yesterday I had quite a thorough talk in Azerbaijan, today I had a talk to you about many important issues, I will then meet with the Prime Minister and the President, and hope that we will be able to find options for solving the situation that has escalated recently. We have stated and again state that the internationally recognized borders and the territorial integrity are our red line”, the Iranian FM said.

He expressed hope that the region will move on the path to establishing stability, cooperation and expanded ties.

Mohammad Javad Zarif stated that Armenia has always been a very good neighbor for Iran. “Many efforts have been made on the sidelines of the bilateral relations, and during the past two days Iran’s minister of roads and urban development was also in Armenia, and many productive agreements have been reached within that framework. South Caucasus is of vital importance for us, and the national security is the preservation of peace and stability in the region. Iran’s policy has been the preservation of peace and stability in the region. We continue this policy and respect the sovereignty and territorial integrity of all countries”, he added.

FM Zarif added that during the Nagorno Karabakh conflict they have tried to be useful to both Armenia and Azerbaijan in order for the crisis to be solved peacefully. “We have respected the territorial integrity and sovereignty of these countries, the rights of their peoples. During this new crisis we have made special efforts to play a role in solving the crisis, that’s why we have sent our special envoy – the deputy foreign minister, to the region”, he said.