France concerned over opening of ''trophy park'' in Baku, which is against reconciliation desire | ARMENPRESS Armenian News Agency

France concerned over opening of ''trophy park'' in Baku, which is against reconciliation desire 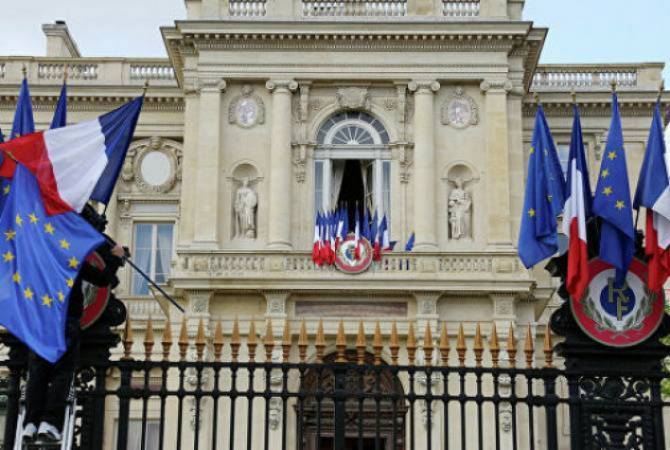 
YEREVAN, MAY 6, ARMENPRESS. France is concerned over the opening of the ''trophy park'' by Azerbaijan in Baku, where Armenian military equipment taken as trophy and wax mannequins depicting Armenian soldiers are exhibited, a diplomatic source of ARMENPRESS at the Foreign Ministry of France said.

‘’As a Minsk Group Co-chair country, France is committed to the establishment of sustainable peace and prosperity in the region. France is concerned over the public exhibition during the opening of the park on dedicated to the military victory in the last war of Nagorno Karabakh. This deadly conflict has caused much grief and disaster in many families both in Armenia and Azerbaijan, and that opening ceremony goes against the reconciliation desire which in numerous occasions has been supported also by the Azerbaijani authorities’’, the diplomatic source said.

France will continue working together with the other Co-chairs for reaching the goals defined by the April 13 statement of the OSCE Minsk Group Co-chairs. ‘’This is the demand of the President and Minister of the Republic’’, the source at the French Foreign Ministry said.

The April 13 statement runs as follows,

‘’ The Co-Chairs of the OSCE Minsk Group (Igor Popov of the Russian Federation, Stephane Visconti of France, and Andrew Schofer of the United States of America) released the following statement today:

The Co-Chairs note with satisfaction the consolidation of the ceasefire, and are closely monitoring the implementation of the agreement reached by the parties on 9 November 2020.  The Co-Chairs welcome the significant achievements with regard to the return of the remains of the deceased, and the ongoing progress with regard to the resettlement of those displaced by the conflict, provision of humanitarian assistance and adequate living conditions, as well as constructive discussions aimed at unblocking transportation and communication lines throughout the region.

The Co-Chairs remind the sides that additional efforts are required to resolve remaining areas of concern and to create an atmosphere of mutual trust conducive to long-lasting peace.  These include issues related to, inter alia:  the return of all POWs and other detainees in accordance with the provisions of international humanitarian law, the exchange of all data necessary to conduct effective demining of conflict regions; the lifting of restrictions on access to Nagorno-Karabakh, including for representatives of international humanitarian organizations; the preservation and protection of religious and cultural heritage; and the fostering of direct contacts and co-operation between communities affected by the conflict as well as other people-to-people confidence building measures.

Having in mind the terms of their OSCE mandate and the aspirations of all the people of the region for a stable, peaceful, and prosperous future, the Co-Chairs stress that special attention should be paid to the achievement of a final comprehensive and sustainable settlement on the basis of the elements and principles well-known to the sides.

In this respect, the Co-Chairs call on the parties to resume high-level political dialogue under the auspices of the Co-Chairs at the earliest opportunity.  They reiterate their proposal to organize direct bilateral consultations under their auspices, in order for the sides to review and agree jointly upon a structured agenda, reflecting their priorities, without preconditions.

The Co-Chairs also express their strong support for the continuing activities and possible expansion of the mission of the Personal Representative of the OSCE Chair-in-Office (PRCiO) and call on the sides to provide full access and support to its efforts. The Co-Chairs underscore their readiness to resume working visits to the region, including Nagorno-Karabakh and surrounding areas, to carry out their assessment and mediation roles. In this regard, the Co-Chairs remind the sides of the requirement to provide unimpeded access and maximum flexibility of movement with regard to the Co-Chairs’ travel itineraries, in accordance with their mandate and previous practice'’.