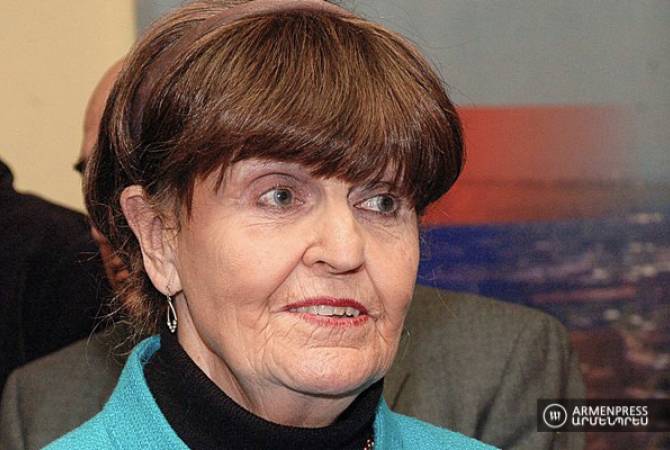 
YEREVAN, APRIL 23, ARMENPRESS. Member of the British House of Lords, Baroness Caroline Cox calls on the United Kingdom to recognize the Armenian Genocide.

She addressed three messages during a video statement for ARMENPRESS on the occasion of the 106th anniversary of the Armenian Genocide.

“The first is a message of gratitude to the Armenian people who held the frontline of faith and freedom for the rest of the world”, Caroline Cox. She noted that despite the sacrifice and enormous sufferings and also living with neighbors who do not have a respect to human rights and democracy, the Armenian people remained committed to the preservation of universal values. “You are a beacon of light in a very dark part of the world”, she said.

Her second message was about anger. “The international community has allowed Turkey and Azerbaijan impunity for the violation of human rights and to perpetrate atrocities”, Caroline Cox said.

She talked about three genocides, stating that the first one took place in 1915 by the Ottoman Empire, and the next two ones, according to her, are the wars by Azerbaijan against Artsakh in 1990-1994 and 2020. “The last war was full of war crimes. The Genocide Watch independent organization has defined the recent war as genocide. So, as we are commemorating the Genocide, but still continuing genocide against people. I challenge Her Majesty’s government to recognize the Genocide again and again. I am ashamed they don’t”, she said.

Caroline Cox expressed happiness over the fact that Wales within the UK has already recognized the Armenian Genocide, and added that there is a even an Armenian Genocide memorial in Cardiff, the capital of Wales.

“My third message is one of love and affection. I had a privilege of visiting your nation 85 times, and many were during the previous war in Artsakh. And I also came with my colleague David Thomas during the last war. And we always return humbled and inspired by your people, your courage, your hospitality, culture and your commitment to democracy. It’s hard to think of any nation in the world of a comparable size that has contributed so much to human civilization in art, culture, education and many other areas. I promise you that we will stand with you in love, affection and gratitude. And all we can is to try to help you to achieve the justice you deserve”, Baroness Caroline Cox said.

21:29, 09.24.2021
Viewed 1810 times Today, no Armenian lives or practically could live in the territories under the control of Azerbaijan – Pashinyan