The “Chinese model” of poverty reduction could eradicate it 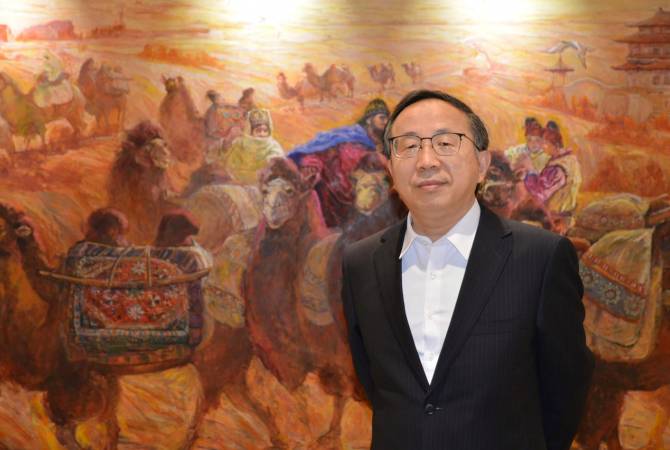 
YEREVAN, MARCH 31, ARMENPRESS. The Embassy of the People’s Republic of China in Armenia, with the information support of ARMENPRESS state news agency, has launched an online exhibition dedicated to poverty alleviation in China. It aims at introducing the “Chinese model” of eradicating poverty to the world.

In an interview to ARMENPRESS, Ambassador Extraordinary and Plenipotentiary of the People’s Republic of China to Armenia Fan Yong talked about the “Chinese model” of poverty reduction, the international cooperation over the matter and other issues.

- Your Excellency, thank you for this interview. Recently the Chinese embassy with the information support of ARMENPRESS launched the online exhibition dedicated to poverty alleviation in China. Please, present our readers the occasion of holding the exhibition.

Thank you for the opportunity to meet the readers of ARMENPRESS.

Not long ago, Chinese President Xi Jinping announced that China has secured a "complete victory" in its fight against poverty. Over the past eight years, the final 98.99 million impoverished rural residents living under the current poverty line have all been lifted out of poverty. All 832 impoverished counties and 128,000 villages in China have been removed from the poverty list. 28 ethnic minority groups with relatively small population have shaken off poverty collectively. It is indeed the first time that China has the success of eliminating extreme poverty. As the biggest developing country in the world, with the largest population, China has made marvelous and historical achievement of poverty reduction. And it has been done with several decades of continuous restless efforts and dedications.

Since late 2012, China has lifted 10 million people out of poverty every year, built or upgraded 1.1 million kilometers of rural roads, provided a reliable power supply to rural areas, and expanded fiber-optic internet access and 4G signal coverage to more than 98% of its poor villages. During the same period, some 25.68 million impoverished people from 7.9 million households have witnessed their houses renovated, and more than 9.6 million people have been relocated from impoverished areas.

Mr. Ambassador, this is such an astounding and monumental work. What is China’s secret of success in fighting poverty?

The leadership of the Communist Party of China, the People-centered approach, the political advantage of socialist system and strategy of targeted poverty alleviation are crucial to China’ victory.

The Party’s leadership has provided a solid political and organizational guarantee for China's poverty alleviation efforts. China upholds a people-centered philosophy of development and in-pursuing prosperity for all. Eradicating poverty, improving people’s living standards, and gradually achieving common prosperity is the essential requirement of the development with Chinese characteristics. Political advantage of socialist system can bring together the needed resources to accomplish great tasks. A total of 255,000 teams were dispatched to offer on-the-ground support and over 3 million people were sent to the countryside as special commissioners for poverty relief. About 246 billion U.S. dollars of fiscal funds have been invested into poverty alleviation over the past eight years.

- China has succeeded in developing a model of overcoming poverty which includes economic development and raising the people’s welfare. Is China ready to share its experience and contribute to the global development of fighting poverty?

With absolute poverty eliminated, China has made great historical achievements. Since the beginning of the reform and opening-up over 40 years ago, China has lifted 770 million rural residents out of poverty which accounts for more than 70% of the global total, according to the World Bank's international poverty line. China has met the poverty eradication target set out in the United Nations' 2030 Agenda for Sustainable Development 10 years ahead of schedule.

China has actively participated in international cooperation on poverty reduction through multilateral and bilateral channels. The Belt and Road Initiative that China proposed is expected to lift 7.6 million people out of absolute poverty and 32 million out of moderate poverty in the related countries.

- Mr. Ambassador, how do you see the prospects of cooperation with Armenia in this context?

Poverty alleviation philosophies with Chinese characteristics, such as "targeted poverty reduction", are drawing more and more attention from the international community. We wish to share our success and experience with our Armenian friends. With the help of ARMENPRESS, we host the online-exhibition of Poverty alleviation in China, and we hope this exhibition may bring some help in fighting against poverty.