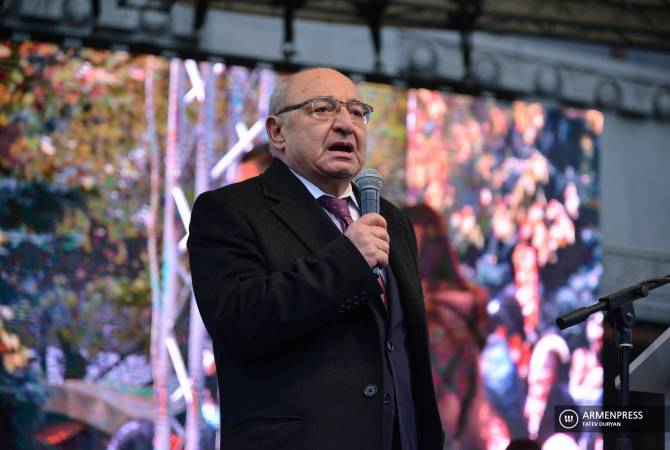 
YEREVAN, DECEMBER 5, ARMEPRESS. The united candidate of the Salvation of the Motherland Movement Vazgen Manukyan presented the roadmap for solving the situation in Armenia and Nagorno Karabakh (Artsakh).

ARMENPRESS reports Vazgen Manukyan referred to the issue during the December 5 rally organized by the Movement at the Freedom Square.

''The tasks we were facing in 1988 are again facing us and all those tasks must be solved. This movement is the path that gives an opportunity to change the situation in Armenia in a civilized way. An interim Government will be formed. What will be the tasks of that Government? They must be solved all together'', Manukyan said.

He noted that the first issue is related to the trilateral declaration signed between the leaders of Russia, Armenia and Azerbaijan.

‘'We will never reconcile with that document, but we cannot renounce it. It will mean war against Azerbaijan and Turkey and troubles with the Russian peacekeepers.

This agreement has a number of omissions and the new government must be able to turn any uncertainty in the document in favor of Armenia through negotiations. We need to rebuild our army, restore efficiency, turn it into a modern army.

Our special relationship with Russia is also a security issue. Allied relations must be restored. We have to re-enter the negotiation process, it is very important for us'', Vazgen Manukyan said.

The candidate for the post of the Prime Minister of the opposition added that another important issue is to help the families of missing servicemen, prisoners of war, wounded and killed servicemen, as well as those who were transferred from Artsakh to Armenia.

'' The improvement of Armenia's atmosphere is a major issue. External influential forces are acting in Armenia, deliberately dividing our people. We need to clear that field, and the bigger the tasks we set, the more united we will be. Each victory starts from a defeat. We need to rise and move forward in a short period of time'', Vazgen Manukyan said.

Vazgen Manukyan served as the first Prime Minister of Armenia from 1990 to 1991 under President Levon-Ter Petrosyan. He then served briefly as Defense Minister.

10:21, 06.21.2021
Viewed 1117 times Pashinyan announces how many seats his Civil Contract party will have in newly-elected parliament