By promising to send its army, Turkey trying to encourage Azerbaijan to continue fighting – expert 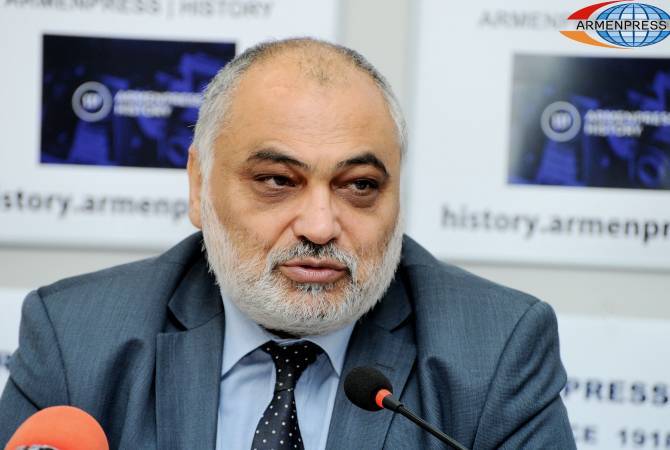 
YEREVAN, OCTOBER 21, ARMENPRESS. Commenting on the announcement of the vice president of Turkey Fuat Oktay, saying that they are ready to send their troops to Azerbaijan if Baku applies, acting scientific director of Institute of Oriental Studies of Armenian National Academy of Sciences, academician, expert on Turkish studies, Ruben Safrastyan says it’s a method of encouraging Azerbaijan to continue fighting, Safrastyan told ARMENPRESS.

‘’In fact, Azerbaijan is using its last reserves, the army of which is receiving serious blows, particularly during the last days. Virtually, by that Turkey tries to encourage Azerbaijan to continue fighting. I am confident that if there was not the Turkish factor, Azerbaijan would embrace ceasefire long ago and would start negotiations. I had predicted long ago that Turkey is ready to send troops to Azerbaijan, because if Turkey does not want to see Azerbaijan totally crushed, it has to send its troops. Turkey has involvement right now, but sending troops is the last thing Turkey can do to be involved in the war’’, Safrastyan said.

According to him, one can ask what will be the reaction of Russia and Turkey’s NATO allies to such a development.

‘’Russia can take tougher measures, using all its opportunities. I think this possible development will deserve the very negative attitude of its NATO allies. If Turkey sees that Azerbaijan is losing, no other option will remain for Turkey. Will they allow Azerbaijan to lose? I think we should take this announcement serious’’, the turkologist said.

According to Ruben Safrastyan, Turkey can stand back from the idea of sending troops to Azerbaijan only in case of very powerful pressures from Russia, the USA and its NATO allies.

Azerbaijan unleashed full-fledged war against Artsakh on September 27. It’s directly supported by Turkey, which has sent thousands of Syrian and Libyan terrorists to the conflict zone to fight against Armenians. Turkey also has F-16 fighter jets in Azerbaijan, which Turkey and Azerbaijan denied for a long time, but later Azerbaijani president Aliyev admitted it, saying that they are on the ground and do not participate in any military operation.

The Armenian side has provided proofs that a Turkish F-16 fighter jet downed an Armenian SU-25 jet in the Armenian air space on September 29.