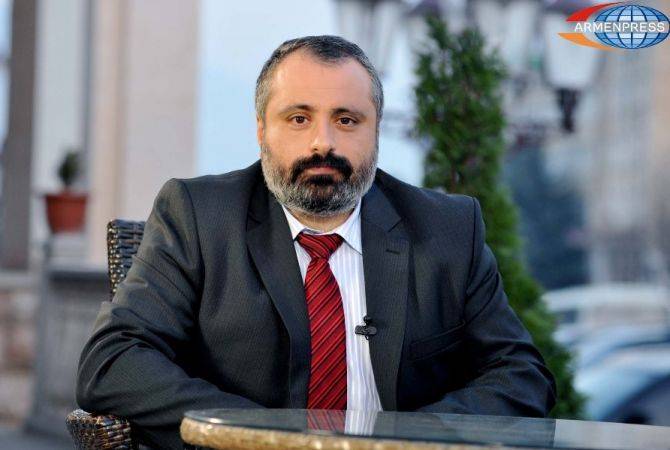 
STEPANAKERT, OCTOBER 17, ARMENPRESS/HH. Turkey’s involvement in the NK conflict with its support to Azerbaijan and transfer of mercenaries from terrorist organizations from Syria and Afghanistan doesn’t simply focus on assisting the Azeris to in their goal of capturing Artsakh, according to the Artsakh presidential advisor Davit Babayan.

Babayan says Turkey instigated the war and exploited it with the purpose of deploying the thousands of terrorist not only deep inside Azerbaijan, but also to Russia and Iran – something the Armenian side has warned of and these warnings have been confirmed.

“The infiltration of terrorists is extremely serious. According to our intelligence data there are already several thousands of terrorists who have been transferred to Azerbaijan through Turkey. But not all of them are participating in the attacks on Artsakh. They are separated into four parts: one part is at the Artsakh front, the other is deployed at the border with Russia, the third is deployed at the border with Iran, and the fourth part is deployed in different locations inside Azerbaijan, in order to clampdown any potential domestic discontent in Azerbaijan, and we already see that such discontent is maturing very quickly because of the large numbers of Azerbaijani military losses and victims. That is, these mercenaries are there also for suppressing domestic unrests.

We see that the terrorists have already infiltrated into Russian territory. We had warned from the beginning that some of these mercenaries are stationed at the border of Dagestan, and a potential infiltration into Russia can’t be ruled out. This became reality afterwards. The Russian foreign intelligence agency officially announced about this. According to the published information, these mercenaries have reached Chechnya, and four of these terrorists have been eliminated there. The other syndicate entered Volgograd, where they plotted terror attacks, the jihadists were plotting to bomb government buildings, military barracks, industrial facilities and one of Russia’s historic monuments, the “The Motherland Calls.”

It is already clear that these terrorists appeared in Russia from Azerbaijan, where in turn they were taken to by Turkey, after being recruited in Syria. This all shows that the neighboring countries are also concerned. And not only are they concerned, they are eliminating these terrorists in their territories. We can’t rule out a potential situation when these countries will start eliminating these terrorists inside Azerbaijan itself. And I think everything is going towards that scenario,” Babayan said in an interview to Hayastani Hanrapetutyun (Republic of Armenia, HH) newspaper.

HH – Please elaborate on the reports on these terrorists infiltrating Iran.

Babayan - The Iranian side is one of the targets of the terrorists. You are aware that one of the targets of Turkey, Azerbaijan and the terrorists is to strike the reservoir built on Araks River. It was built by the Iranian side and is mostly serving the needs of Iran, because Northern Iran is factually in an ecological disaster. The abovementioned reservoir is somewhat helping, so to say – it is the only source of saving that territory. And now, Turkey, the terrorists and Azerbaijan want to take over that territory. And they seek doing so through mercenaries. Moreover, these terrorists have most probably already infiltrated into Iranian territory. This can’t be of no concern to Iran. As we see, this is a serious problem which is conveying a new quality to the concerns of other countries and their actions.

Babayan - We shouldn’t wait for an official response. I am more than sure that appropriate measures are already underway.

HH - What is Turkey seeking to accomplish by creating chaos not only in the region but also virtually all neighboring countries. The Turkey which had initially adopted the “no problems with neighbors” principle has problems with everybody today. Moreover, not only with neighbors.

Babayan – Turkey has a very rich experience of struggling when it is in a very difficult and multi-layered adventurism. We shouldn’t underestimate [Turkey]. One of its goals is to undermine the Armenian statehood. Next, support Azerbaijan, and by getting established there Turkey is making its first step on the path of realizing its dream of pan-Turkism. Probably that’s why they didn’t find it necessary to notify anyone, including their NATO allies, about their actions. Turkey has already entered Azerbaijan and it won’t leave it on its own will.