Pashinyan meets with Ambassadors, emphasizes recognition of NK people’s right to self- determination 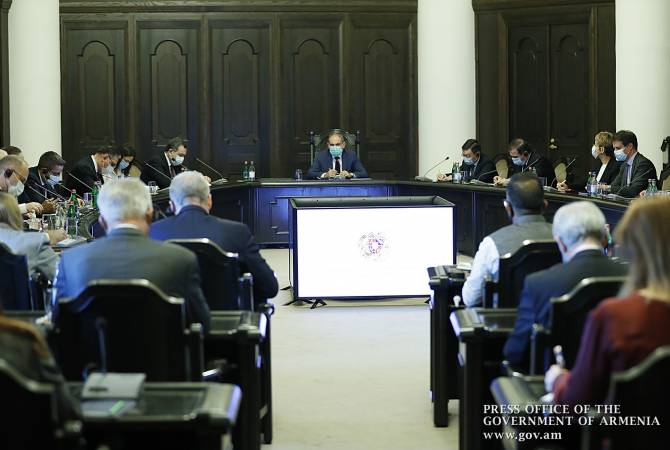 The Prime Minister gave details of the hostilities launched by Azerbaijan against Nagorno-Karabakh, highlighting Turkey’s direct involvement in it.

Understandably, the occasion for our meeting today is the war happening in Artsakh, and I consider it very important to acknowledge a few facts at this stage.

First of all, it is Azerbaijan which attacked in the direction of Nagorno-Karabakh, despite the principle that use of force or the threat of force is unacceptable in the context of the resolution of the Karabakh issue, even though it is one of the internationally recognized principles viewed as a basis for resolution of the conflict.

Next, it is obvious this war would not begin had there not been full readiness shown by and full engagement of Turkey. I would like to draw everyone’s attention to the fact that the hostilities began as a continuation of the Turkish-Azerbaijani joined military exercise. And that Turkey’s engagement in and encouragements of the war, I believe, is public, it is happening publicly, although there were Turkish officials who posted in the social media, as I was informed, they later deleted some of their posts. But it is quite obvious and I think that is backed by not only the evidence which we have shared with our colleagues. It is also proven by public statements to date: Turkey continues to remain engaged in the hostilities, in the fighting.

It is quite obvious to me that this is a part of Turkey’s expansionist policies, because the Armenians in the South Caucasus are the last remaining obstacle on Turkey’s path towards the East, the North and the South-East. And at least to me, it is quite obvious that what is happening must be viewed in the context of what is happening in the Mediterranean, in Syria, in Iraq, as well as the relationship with Greece, with Cyprus. It is a part of the context of Turkey’s policies in the mentioned areas. This is clearly a policy of reinstating the Turkish Empire.

The hostilities and their nature once again have demonstrated that the Armenian people, the Armenians of Nagorno-Karabakh are facing an existential threat, and the policy of shelling towns and villages in Nagorno-Karabakh is compared to the hate policy which for fifteen years has been promoted in Azerbaijan.

It becomes obvious that Azerbaijan’s official political objective is to annihilate the Armenians, at least in Nagorno-Karabakh. And I think the most important symbol of this is the Ramil Safarov case, which I hope all of you know details of, so I will spare you the details of that case.

I wish also to turn to the Azerbaijani side's claims that the Armenian side is allegedly targeting civilian infrastructure in Azerbaijan, etc.

The Defense Army of Nagorno-Karabakh took any decision to act in the direction of any town or village after it became obvious that it was impossible in any other way to stop the rocket attacks on Stepanakert and on other towns and villages.

Let us watch a video which shows what attacks had been launched since the beginning of the war on Stepanakert, the capital city of Nagorno-Karabakh. But before turning to the video, I would like to highlight a fact that you all may be aware of: that is, the President of the Russian Federation Vladimir Putin made a public appeal, after which the Foreign Affairs Ministers of Armenia, Azerbaijan, and Russia took part in the adoption of the statement on ceasefire. But the ceasefire has not so far been respected by Azerbaijan.

The ceasefire was supposed to enter into effect at noon, 12 o'clock p.m., but before the de jure entry into force of the ceasefire agreement up to the point, there were intensive hostilities by Azerbaijanm which is contrary to the logic of the ceasefire agreement. At 12:05, Azerbaijan started an attack, an offensive on the territory of the Autonomous District of Nagorno-Karabakh and attempted to conquer the town of Hadrut. Right now, there are military operations in the vicinity of Hadrut.

The Nagorno-Karabakh Defense Army forces are trying to drive out the sabotage groups, which attempted to seize Hadrut. The situation is tense, especially in the southern segment; we actually didn't manage to achieve a ceasefire, although the Armenian side is ready to comply with the ceasefire.

We signed to conform to our intention, and we are committed to our intention - point one, point two - on the ceasefire, on humanitarian actions, and on the start of negotiations with the unchanged format of the OSCE Minsk Group co-chairs.”

During the meeting, the heads of foreign diplomatic missions and international organizations were shown a video on the military operations carried out by Azerbaijan against peaceful settlements and civilian infrastructure in Nagorno-Karabakh.

After watching the video footages, the Armenian Prime Minister called the attendees’ attention to the fact that the video featured neither military infrastructure nor any military personnel on the ground, which evidences that this was a clearly deliberate strike against peaceful settlements and civilian infrastructure.

“My assessment is unequivocal: The Armenians are trying to quell the threat of genocide faced in this war,” Nikol Pashinyan said.

The Premier thanked RF President Vladimir Putin and French President Emmanuel Macron as the leaders of the OSCE Minsk Group co-chairing nations who are making every effort to halt violence. Nikol Pashinyan also thanked the U.S. administration and President Donald Trump for urging an end to hostilities.

“We expect the co-chairing nations to continue their efforts. We are prepared to be constructive in this process. But we think that the resumption of the negotiation process should take place in accordance with the logic formulated in the Moscow statement,” Nikol Pashinyan emphasized.

The Prime Minister also thanked German Chancellor Angela Merkel, President of the European Council Charles Michel, Austria’s Chancellor, and the President of the Islamic Republic of Iran, with whom he had a telephone conversation and exchanged views on the situation.

The Premier highly valued the positions expressed by the Prime Ministers of Russia, Kazakhstan and Belarus during the EAEU Intergovernmental Council meeting, which was held in Yerevan on October 9. He hailed the fact of their coming to Yerevan and attending the scheduled meeting in this difficult situation.

In conclusion, Nikol Pashinyan thanked all our partners who have shown keen interest in establishing peace and stability in the region’’.