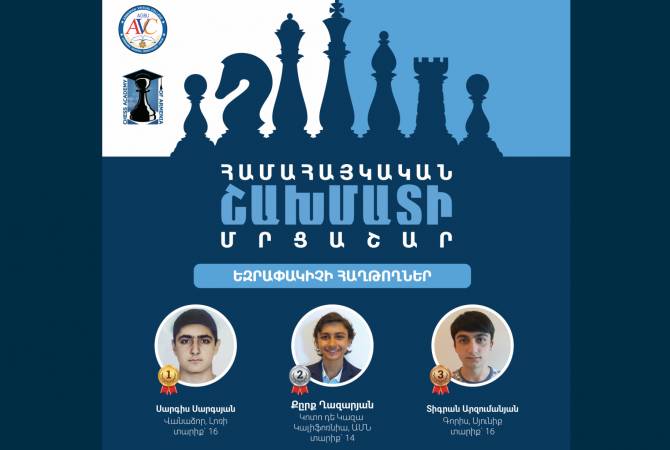 
On June 26, the AGBU Armenian Virtual College (AVC) together with Chess Academy of Armenia held the Online Closing Ceremony of the first Pan-Armenian Chess Tournament (PACT).Held on June 8-26, 2020 through the AVC interactive online learning platform the virtual tournament attracted over 520 participants from 36 counties all over the World.

The online ceremony was opened with welcomingmessagesfromthe AGBU AVC Founding President, Dr. YervantZorian, describing the goals and objective of this tournament,and the President of the Chess Academy of Armenia, GrandmasterSmbatLputian, referring to the impact of chess on strategic thinking.

After the introductory part, the three Champions of the Pan-Armenian Chess Tournament2020 were announced:

All the winners were awarded with dedicated certificates and special gift cards from AGBU AVC.

“The idea of creating this innovative tournament was not only to attain the winners. But rather, it was most importantly to create a dynamiconline community of chess loving students with world-wide participation”, emphasized Dr. YervantZorian congratulating the winners.

Partitioned to five geographic regions - Armenia and Artsakh, Asia and Oceania, Europe, Americas, Middle East and Africa - the tournament was structured in two stages, five regional semi-finals and three rounds of the final games. The first stage was played by the participants from each region united to come up with three finalists. At the second stage, three challenging rounds of the final tournament brought together the finalists to contest the PACT Winner title. Between the tournaments, the participants were able to visit the AVC page dedicated to PACT to take part in online chess activities with renown Armenian champions and learn new chess skills from multimedia interactive AVC Chess courses.

“I was happy to have an opportunity to take part in the online First Pan-Armenian Chess Tournament organized by the AGBU Armenian Virtual College. Thanks to this contest, I made friends with players from different parts of the world”, Kevork Yeghian, the first place finalist of the Middle East and Africa said.

At the end of the awards ceremony, the participants were invited to take part in a short quiz and win additional prizes. In addition, the Chess Academy of Armenia had prepared a special surprise for all participants, a live blitz chess match between two Armenian women chess champions, European Women team Champion Elina Danielyan, and Russian Women Rapid Champion Karina Ambartsumova. The hot match was emotionally commented by U.S. Women Vice-ChampionTatev Abrahamyan and U.S. Vice-Champion VaruzhanAkobian.

11:29, 05.19.2022
3094 views U.S. recognizes role of population of Nagorno-Karabakh in deciding its future–Ambassador Tracy’s interview to ARMENPRESS