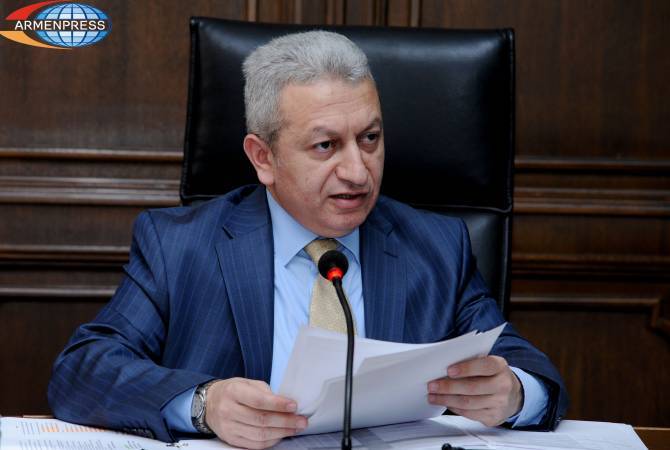 
YEREVAN, JUNE 5, ARMENPRESS. The Armenian government is going to finance the 2020 state budget’s envisaged deficit both from external and domestic sources. There is already an agreement with the International Monetary Fund (IMF) over a certain sums of money, the rest is expected to be funded at the expense of domestic sources, Finance Minister Atom Janjughazyan said during the joint session of the parliamentary standing committees.

The minister reminded that due to the current novel coronavirus crisis they have proposed the Parliament to fix nearly 324 billion drams instead of the envisaged 162 billion drams in deficit. “According to the data published in April it is expected that the global economic decline will be nearly 3.5%. For the EU, around 7.5% decline is forecast, for Russia – 5.5%. And this supposedly will also have an impact on our forecasts of this year. And under the conditions of these 324 billion drams in deficit we assessed that we need additional 260 billion drams for implementing the anti-crisis measures”, the minister said.

There is already an agreement with the IMF, the sums to be attracted will be used for meeting the needs of the state budget. “A total of 280 billion USD is already available. But the 35 million USD will be available based on the results of the revision of the second program expected in autumn. It’s expected we will finance the difference by issuing additional state debt in the domestic market”, the minister added. “We believe that the trust is quite deep, and our cooperation with the local investors has a history of already decades. Within this framework we expect that it would be possible to finance the difference by issuing a debt from the domestic sources”, the minister said, adding that they also consider other sources, through other international financial organizations.

Minister Janjughazyan assured that the current rating allows to think also of issuing Eurobonds in the international financial market.