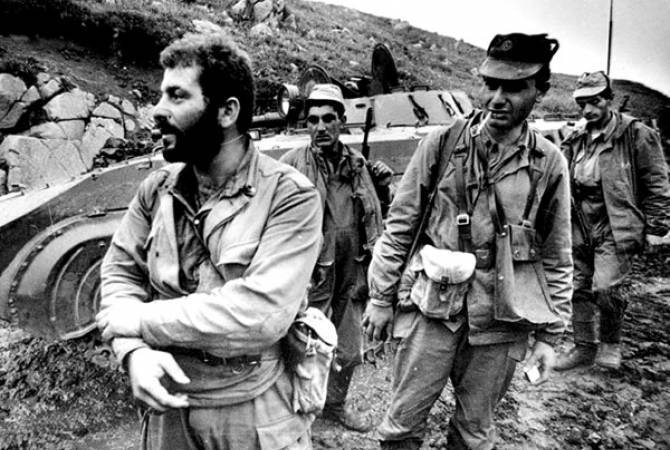 
On the night of April 29 to April 30, 1991, USSR and Azerbaijan launched a large-scale military operation named “Ring” against the peaceful Armenian population of a great number of Armenian villages in Shushi, Martakert, Hadrout regions of NKAO, as well as many villages in Shahumyan region, Getashen sub-district and Armenia’s Noyemberyan, Goris, Ijevan and Shamshadin regions. The first targets of the operation were the Armenian villages of Getashen (nowadays Chaykend) and Martunashen (nowadays Gharabulagh) that were part of Soviet Azerbaijan’s Khanlar district (in 1989 the district announced its decision to be unified with the Shahumyan region).

The 23rd Guards Motor Rifle Division of the Soviet Union’s 4th Army, elements of the 104th Guards Airborne Division located in Shamkhor, Soviet Interior Ministry forces of Baku as well as Special Purpose Police Units of the Ministry of Internal Affairs of Azerbaijan (OMON) were involved in the aggressive military operation targeted at the peaceful Armenian population.

The operation had a special scheme; Soviet army divisions were surrounding the Armenian villages after which Azerbaijan’s OMON forces were entering the villages, creating incompatible conditions for life they were capturing and mutilating people, using force or threat, looting and forcibly deporting them from their native villages.

A senior associate of the Carnegie Foundation, British analyst Thomas De Waal described the operation as “the beginning of the open, armed phase of the Karabakh conflict” and “arguably the first and last “Soviet civil war”․

Native Armenians and their self-defence units were to show resistance to all of the units of Azerbaijani militia supported by the Soviet divisions.

There are many accounts related to the situation in Getashen and Martunashen villages long before the launch of the operation. On September 14, 1990, in his speech on the Armenian television, Lt Col of the Interior Ministry forces Aleksander Ishchuk accused the Soviet authorities of using internal troops against civilians, especially in the NKAO. Besides this, Ishchuk also did not consider it appropriate to eliminate the state of emergency and withdraw internal troops from the Armenia, NKAO and Shaumyan region, considering that this would further aggravate the situation and allow Azerbaijani armed groups to invade the NKAO and settle the score with the Armenians.

The European Parliament in 1991 also spoke out on the tension of the situation in the Getashen subdistrict and in the above-mentioned regions of NKAO and Armenia, adopting a resolution on March 14 and calling on the President of the USSR Gorbachev to put an end to the deliberate and forcible eviction of the population of Karabakh and surrounding Armenian-populated areas, and stop infringement on the security of residents.

However, these responses did not prevent either the Center or even more so the authorities of Soviet Azerbaijan from giving up on the pre-planned operation. On the night of April 29 to April 30, the Soviet forces of Kirovabad (Gandzak) along with the Azerbaijani OMON, blocked Martunashen and Getashen villages. On the one hand, from the high hills adjacent to the villages, armoured vehicles began to fire at the houses, on the other - helicopters, after which the massacre of civilians and the forced deportation of residents took place. The 2 Armenian settlements were entirely cleansed from Armenians by May 8th.

On May 5, representatives of human rights organization  named “Memorial” and members of the Karabakh Committee of Russian intellectuals held protests in Leningrad against the illegal actions in Getashen and Martunashen. On the next day, the Lensoviet (the Executive Committee of the Council of People's Deputies of the City of Leningrad) raised the issue of the massacre and deportation of Armenians in these villages.

The Chairman of the Foreign Affairs Committee of the US Senate, Claiborne Pell, who arrived in Moscow in 1991, suggested that the NKAO should be out of Azerbaijan's subordination, noting that the USSR should ensure the security of the Armenian population of the Union, considering the fact that leaving the region under the control of Azerbaijan would further deepen the violence and cause new clashes.

The resolution adopted by the US Senate on May 17, 1991, stated that the attacks on the Armenian civilians from NKAO and Armenia have become frequent in nature and that the Soviet and Azerbaijani forces have destroyed Armenian villages and depopulated Armenian areas in and around Nagorno-Karabakh in violation of internationally recognized human rights, and that the armed militia threatens stability and peace in Armenia.

According to the resolution the US Senate condemned “the attacks on innocent children, women, and men in Armenian areas and communities in and around Nagorno-Karabakh and in Armenia”, “the indiscriminate use of force, including the shelling of civilian areas, on Armenia's eastern and southern borders”, calling for the “end to the blockades and other uses of force and intimidation directed against Armenia and Nagorno-Karabakh”.

As stated in the resolution, the US Senate reconfirms the commitment of the United States to the success of democracy and self-determination in the Soviet Union and its various republics, by expressing its deep concern about any Soviet action of retribution, intimidation, or leverage against those Republics and regions which have chosen to seek the fulfilment of their political aspirations. In other words, the Senate also states that the USSR and Azerbaijan committed massive violations of international humanitarian law like the forced deportations, crimes of aggression, the indiscriminate use of force, military actions against the civilian population, the use of violence against women, children and the elderly. At the same time, the Senate expressed its support for the realization of the right to self-determination.

The deportations in Getashen and Martunashen accompanied by inhumane acts are evidenced by the reports of professor Richard Willson, Harvard University, and “Memorial”, the inter-republican human rights organization. The reports mention that the deportations in Armenian settlements were accompanied by mass violations of human rights; murder, beatings, kidnapping and captivity of people, appropriation of property or illegal acquisition of property at a humiliating price. Both of the reports state that the residents were forced to make a request to leave Azerbaijan "voluntarily".

A number of responses from the international press also confirm the above.

“Christian Science Monitor” (USA) newspaper states: “In the Soviet Union, Armenians saw a guarantee of their security, and now the unfolding events prove the opposite”.

“Washington Post” (USA): “According to the data provided by both of the sides, the fighting began after Azerbaijani militia special forces, accompanied by tanks and armoured vehicles, entered the Armenian-populated areas in the Western part of Azerbaijan… Most Armenians believe that the Kremlin, protecting Azerbaijan, wants to put pressure on them for refusing to participate in the signing of the Union Treaty”.

The above-mentioned excerpts are from the National Archives of Armenia.

It is worth noting that Armenia, unlike Azerbaijan, refused to join the new Union Treaty on March 15, 1990, at the 3rd Congress of People’s deputies of the USSR. Armenia also refused to participate in the all-Union referendum on March 17, 1991, aimed at preserving the USSR, whilst 93.3% of the population of Azerbaijan voted for it.

“Kommersant” newspaper stated that Kremlin gives weapons to the Ministry of internal Affairs of the Azerbaijan SSR, which the latter directs against the Armenian population [«Коммерсантъ», 20 мая, 1991].

Despite the response of the international community, the operation did not stop - on the contrary, until August of 1991, it went on in the same pattern against the Armenian population in the villages of the NKAO and the above-mentioned regions of the Republic of Armenia and was prevented only by the August Putsch in Moscow.

Operation Ring has shown that it is possible to preserve the security of the population only through organized self-defence, the presence of its own armed forces. The Operation “Ring” became the basis for a sharp increase in tension as a result of which the conflict went onto a military phase, leading to an imposed war, in the outcome of which the population of Artsakh was able to protect their right to self-determination.

11:29, 05.19.2022
3179 views U.S. recognizes role of population of Nagorno-Karabakh in deciding its future–Ambassador Tracy’s interview to ARMENPRESS