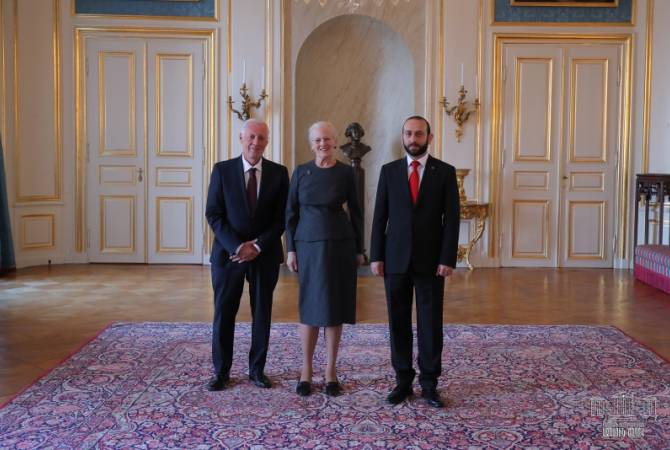 
YEREVAN, FEBRUARY 19, ARMENPRESS. Speaker of Parliament of Armenia Ararat Mirzoyan visited on February 18 the Amalienborg royal place where he had a private meeting with Her Majesty Queen Margrethe II of Denmark, the Armenian Parliament told Armenpress.

The Armenian Speaker of Parliament was accompanied by his Danish counterpart Henrik Dam Kristensen.

At the meeting with the Queen, Speaker Mirzoyan thanked for the reception and highlighted the importance of historical friendly ties between the two peoples, expressing hope that they will deepen.

The Queen of Denmark and Speaker Mirzoyan highlighted the role of two Danish missionaries Maria Jacobsen and Karen Jeppe during the Armenian Genocide in saving Armenian orphans which created a common spiritual connection between the two peoples.

Queen Margrethe II of Denmark attached importance to the arrival of the Armenian high-level delegation and expressed hope that this visit will contribute to further deepening the ties between the two peoples, intensifying the cultural exchange and contacts. She wished success to Speaker Mirzoyan and the Armenian Parliament in fulfilling their functions for the benefit of Armenia.

Speaker of Parliament of Armenia Ararat Mirzoyan and his delegation arrived in Denmark on an official visit.