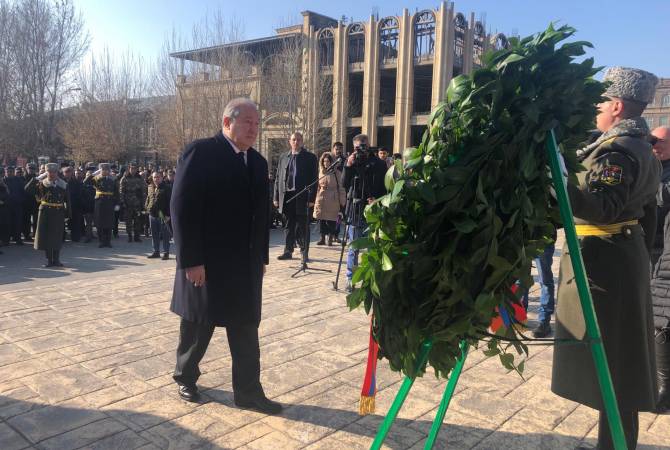 
GYUMRI, DECEMBER 7, ARMENPRESS. Requiems were held in all churches across the province in Shirak Saturday morning in honor of the 1988 earthquake victims as Armenia is marking the 31st anniversary of the tragedy.

President Armen Sarkissian, accompanied by Minister of Emergency Situations Felix Tsolakyan and other government officials, attended the mass at the Holy Mother of God Church in Gyumri, Armenia’s second largest city which was among the heavily-affected areas of the earthquake.

Hundreds of residents visited the churches and cemeteries to pay homage and commemorate the loved ones they lost 31 years ago.

The President, together with other officials and residents of Gyumri, laid flowers at a memorial and observed a moment of silence in remembrance of the victims.

President Sarkissian said in remarks that the attention which now exists will help residents of the disaster zone restore the joy they once had. “And I hope that the time has come for us to give back to you the love that we have kept for 30 years in our hearts, the warmth, the care and the big appreciation that we have for your patience and dignity. The time has come for us to together restore this wonderful city, Gyumri, also Spitak and Vanadzor. To once again bring life and happiness. Here, life has truly defeated death,” the president said.