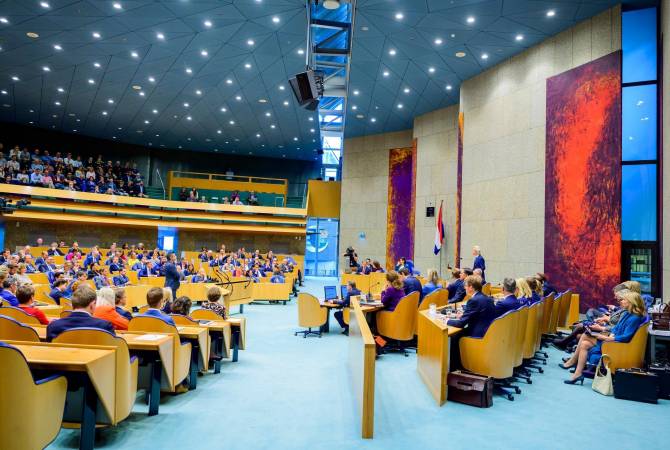 
YEREVAN, NOVEMBER 15, ARMENPRESS. The Foreign Ministry of Armenia welcomes the position of the Parliament of the Netherlands to open a resident Embassy in Yerevan.

“We salute the Dutch Parliament’s stance on opening of a resident Embassy in Yerevan. The move is a manifestation of support to the democratic developments in Armenia. The Embassy will strengthen the long-standing partnership between Armenia and the Netherlands”, the foreign ministry said on Twitter.

Armenia’s Ambassador to the Netherlands Tigran Balayan also thanked the initiators and supporters. “Armenia highly values your friendship and dedication. Looking forward to raising of Dutch flag in Yerevan”, the Ambassador said, mentioning the names of parliamentarians who had a contribution to this initiative, such as Pieter Omtzigt, Joel Voordewind,  Martijn van Helvert, Sven Koopmans and Sjoerd Wiemer Sjoerdsma.

The 4 coalition parties of the parliament of the Netherlands suggested the leadership of the country to provide the foreign ministry 2 million Euros for opening an Embassy in Yerevan as a message of support to the Government of Armenia, MP representing Christian Union faction, member of the House Foreign Affairs Committee of the House of Representatives Joël Voordewind told ARMENPRESS, emphasizing that by this the Netherlands will demonstrate its support to the Government of Armenia to continue the reforms, fight against corruption and protection of human rights with more confident steps.