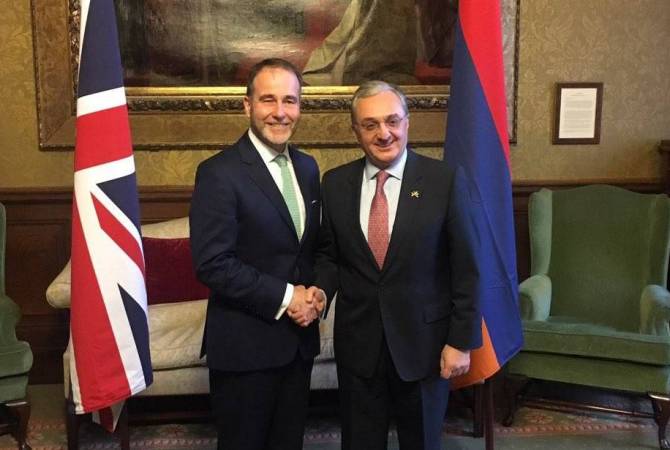 
YEREVAN, OCTOBER 22, ARMENPRESS. Foreign Minister of Armenia Zohrab Mnatsakanyan on October 21 met with UK Minister of State for Europe and the Americas Christopher Pincher on the sidelines of his working visit in London, the Armenian MFA told Armenpress.

The Armenian FM thanked for the warm reception and stated that all preconditions exist to raise the Armenian-British relations to qualitatively a new level and further expand the bilateral cooperation. In this context both officials attached importance to further expanding the dynamic dialogue at all levels aimed at fully utilizing the potential of the bilateral cooperation. As targeted areas the sides mentioned IT, high technologies, creative education, tourism and other spheres.

The two ministers also touched upon a number of urgent issues of the international and regional agenda. In the context of the peaceful settlement process of the Nagorno Karabakh conflict FM Mnatsakanyan highlighted taking actions aimed at preparing populations to peace.