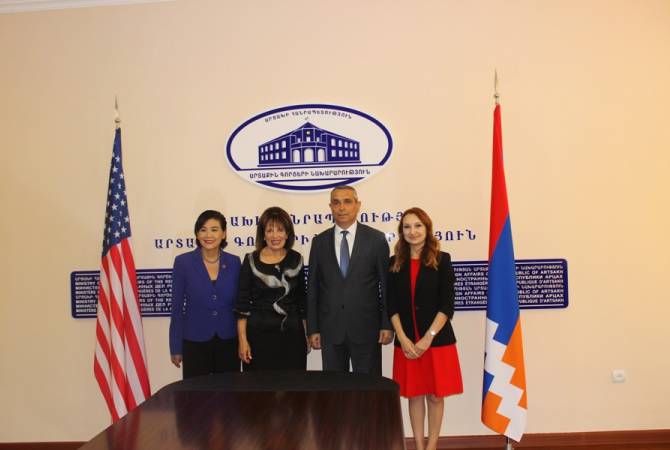 Having welcomed the Congresswomen, the Foreign Minister noted that the authorities of the Republic attach great importance to the relations between Artsakh and the United States at various levels. Masis Mayilian highly appreciated the efforts of the members of the Congress, especially the Congressional Caucus on Armenian Issues, in support of the peaceful settlement of the Azerbaijan-Karabakh conflict, establishment and consolidation of stability in the region, as well as on contributing to the allocation of financial assistance to Artsakh by the U.S. Government. In this context, the Foreign Minister stressed the activities of Jackie Speier and Judy Chu aimed at Washington’s recognition of the fact of Armenian Genocide in the Ottoman Empire and support for the Royce-Engel proposal related to the settlement of the Azerbaijan-Karabakh conflict, providing for the withdrawal of snipers from the Line of Contact between the armed forces, establishment of mechanisms of controlling the ceasefire regime and expansion of the OSCE monitoring mission in the conflict zone.

At the request of the guests, Masis Mayilian presented the main directions and priorities of the foreign policy of Artsakh, as well as the processes of international recognition of the Republic of Artsakh and peaceful settlement of the Azerbaijan-Karabakh conflict.

During the meeting, the sides touched upon issues related to the prospects for the further development of cooperation between the authorities of Artsakh and members of the U.S. Congress.