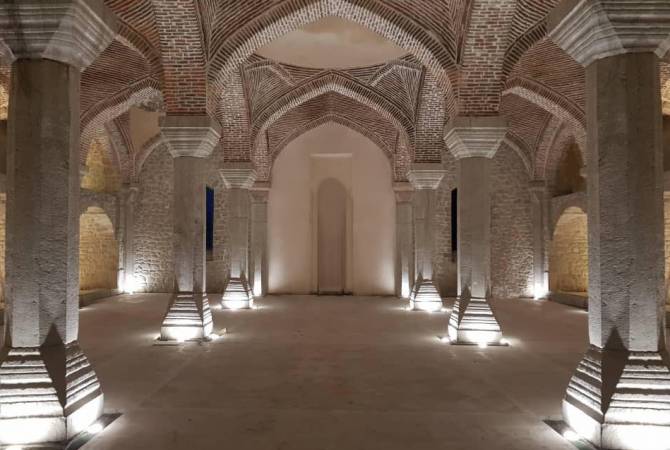 Supporting the initiative of the Government of Artsakh, Revival of Oriental Historical Heritage Foundation started the program of the Upper Mosque restoration in 2014. The project is being carried out as part of Initiatives for Development of Armenia (IDeA) Foundation’s Artsakh development program.

The preservation of the historical exterior of the mosque was part of the program. The works also included the restoration of the madrasa (seminary) building, as well as improvements in the territory adjacent to the mosque, including a small park.

The Upper Mosque in Shushi was built in 1864–1865 by Gohar Agha and was named after her.

“The town of Shushi is a unique destination in Artsakh, with the Gohar Agha Upper Mosque being an inseparable part of the rich history and culture of its old part. It is anticipated that Upper Mosque restoration project will help reveal the historic and cultural heritage of the region and turn the town into a new tourist attraction on the map of Artsakh. We hope the project will stimulate efforts aimed at restoration of the town’s historic district, too,” said Suren Amirbekyan, Manager of Artsakh Development Program at the IDeA Foundation. He added, as part of the project the building of the medresse has been restored, too, which can be used as an educational and cultural center. “It may serve as an academic and educational center or a center for Oriental studies for academics from Armenia and Artsakh; it can host summer schools, congresses, educational and cultural events.”

Keeping in mind the best international practices and standards, the project involved both local and international organizations. Along with an existing partnership with the Artsakh Ministry of Culture, the project also partnered with the Iranian “Part Saman Jahan” architectural bureau; the “TFA-Armenia” architectural bureau; ICOMOS-Armenia; Lorenzo Jurina, professor of the Politecnico di Milano; Faculty of Oriental Studies, Yerevan State University, as well as Iranian Cultural Heritage, Handicrafts and Tourism Organization.

The latter provided significant support in inviting 12 specialists with major experience in brickwork construction, as well as the restoration of Islamic spiritual sites, to participate in the mosque renovation efforts.

The event covering the completion of the Upper Mosque restoration will take place on 14 October 2019 in Shushi.