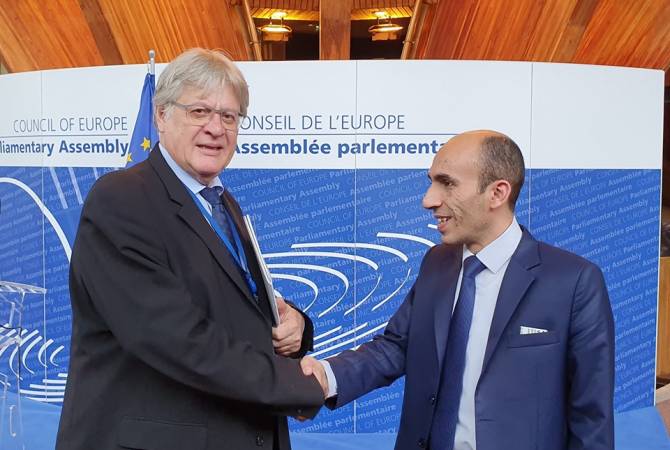 
STEPANAKERT, OCTOBER 3, ARMENPRESS. The Human Rights Defender of the Republic of Artsakh Artak Beglaryan, on October 1-2, had a number of meetings with some high-ranked officials of the Council of Europe in Strasbourg. He presented the situation of human rights protection in Artsakh, as well as, the issues and challenges derived from the conflict and unrecognized status, the Ombudsman’s Office told Armenpress.

Beglaryan met, in particular, Stefan Schennach, Chairperson of the PACE Committee on Social Affairs, Health and Sustainable Development. He introduced the situation and mechanisms of human rights protection in Artsakh, current issues, his official contacts with European organizations and perspectives of possible cooperation.

Beglaryan met also with Killion Munyama, the First Vice-Chairperson of the PACE Committee on Migration, Refugees and Displaced Persons, as well as, the Rapporteur on Internally Displaced Persons. He presented the issues of refugees and internally displaced persons living in Artsakh, considering the absolute ignoring of them by the international community as inadmissible.

The Ombudsman had meetings with some other PACE members and officials of independent bodies.

At all the meetings the Council of Europe officials demonstrated interests in the current situation and issues of the Artsakh people human rights protection, recognizing the urgent necessity of ensuring international engagement of unrecognized states.

To remind, Artak Beglaryan, the Human Rights Ombudsman of the Republic of Artsakh, on September 30, with the initiative and support of the Armenian Delegation to the Parliamentary Assembly of the Council of Europe, participated in the event on human rights protection in de facto states organized at the PACE, Strasbourg. He delivered a speech on the obstacles for human rights protection of the Artsakh people.