Every Armenian should have a citizenship of Armenia – Pashinyan on repatriation 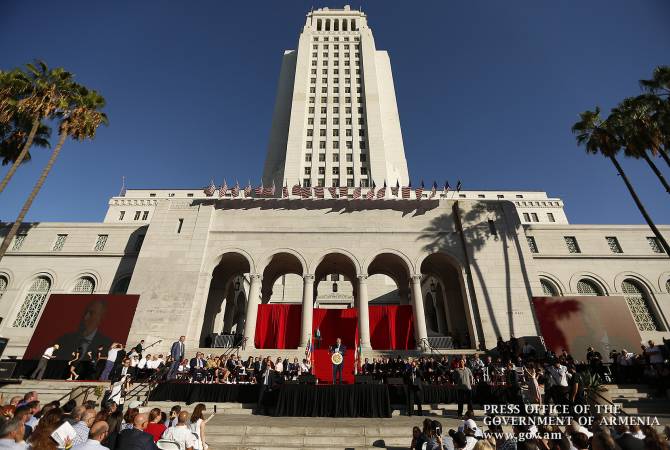 
YEREVAN, SEPTEMBER 23, ARMENPRESS. Armenian Prime Minister Nikol Pashinyan talked about the idea of repatriation during a meeting with the Armenian community in Los Angeles.

“I would like to talk about the idea of a big repatriation. Today many Armenians already return to Armenia. Today we released statistics, which is being made from time to time. Compared to 2015 the positive balance of Armenia’s border crossings increased by 32 times. But I want to speak about the great repatriation, stating that living in Armenia doesn’t mean living just physically. Living in Armenia also means to live with Armenia, and I believe that most of you have always lived in Armenia and today as well live in Armenia because I see and know that you live with Armenia and this is the most important. But on the other hand I want to state that living in Armenia doesn’t mean to be physically in Armenia for 12 months a year or in general in the 21st century living in any country doesn’t mean to constantly live in the same place for 12 months a year”, the PM said.

He stated that in the contemporary world many people, especially the successful people spend most of the year in travel. “And I want to address a message to our compatriots: great repatriation means, for instance, to live physically in Armenia definitely for a month, two months a year. Today the real estate prices significantly increase in Armenia and Yerevan, and having a house in Yerevan, Armenia, means to make a very good and reliable investment, and every Armenian who does not yet have a house in Armenia should have one. Repatriation means to have a business in Armenia, and the most important is to have a citizenship of Armenia. Every Armenian should have a citizenship of Armenia.