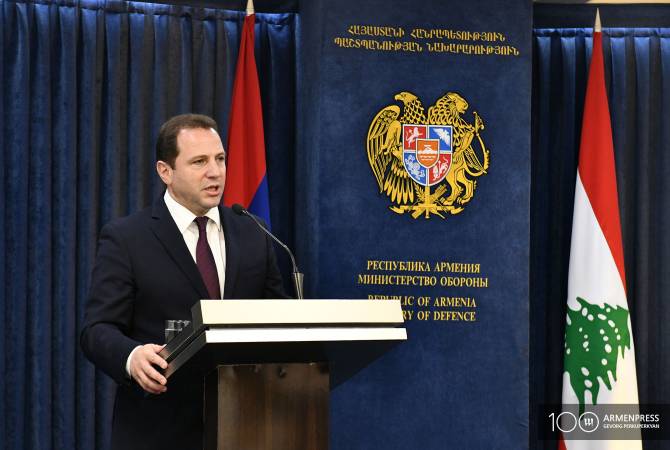 
YEREVAN, SEPTEMBER 20, ARMENPRESS. The Armenian-Lebanese bilateral defense cooperation is based on the long friendship of the two peoples, the readiness for mutual support and common approaches, therefore it has serious prospects, Armenia’s Defense Minister Davit Tonoyan said during the joint press conference with his Lebanese counterpart Elias Bou Saab in Yerevan on September 20.

The Armenian minister stated that this cooperation has firm legal grounds.

On November 9, 2018, during the Armenian defense minister’s visit to Lebanon, the cooperation agreement between Armenia and Lebanon was signed and is currently at the ratification stage in both parliaments.

“I would like to inform that Armenia completed the ratification of the agreement, and it will be signed by the President soon. This agreement is the new version of the 2001 agreement and will provide a broader framework for military and defense cooperation”, minister Tonoyan said.

He said he has discussed with the Lebanese defense minister the current state of cooperation and the expansion opportunities.

“We agreed to carry out cooperation in regular planning format. We consider the exchange of experience in various military-technical directions, the joint drills, education and training as prospective areas”, he said.

The Armenian defense minister introduced his Lebanese counterpart also on the goals and issues of the Armenian humanitarian mission in Syria. “During our meeting we once again affirmed the current high-level political relations between the two friendly countries and reaffirmed the common approaches on international and regional security matters. We also touched upon the military-political developments taking place in neighbor states and our opportunities to take joint actions”, minister Davit Tonoyan said.