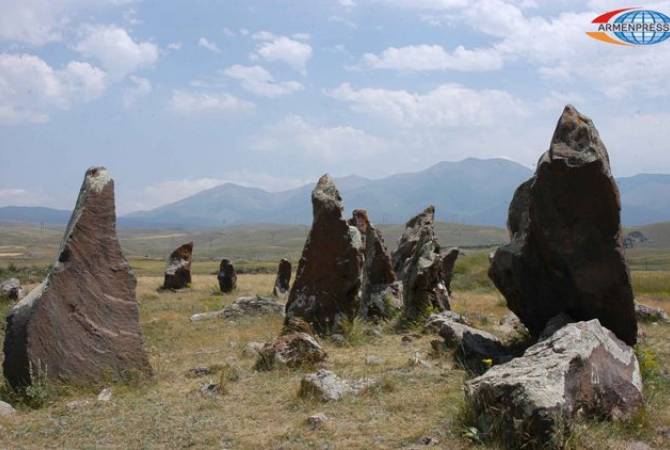 
YEREVAN, JULY 30, ARMENPRESS. Bnorran Historic-Cultural NGO and the Institute of Archaeology and Ethnography (National Academy of Sciences) are finally teaming up to jointly study the mysterious Carahunge: the prehistoric archaeological site near the town of Sisian in the Syunik Province of Armenia. The two institutions have long had differences regarding the structure, and now they are joining forces to find out what Carahunge, aka Zorats Karer, was – an ancient astronomical observatory or a settlement which has a mausoleum status.

Carahunge is often internationally referred to as the Armenian Stonehenge. The construction date of the structure is unknown – presumably sometime between the Middle Bronze Age and Iron Age.

Bnorran Member of the Board Arevik Sargsyan said they believe Carahunge was an ancient astronomical observatory.

“We think Carahunge, where more than 200 stones are located, with 80 having holes in them, is an ancient astronomical observatory, which was studied by Paris Herouni, with other experts having made similar opinions before that,” she said, referring to the late physicist’s views who dated the megalithic structure to 5500 BC and argued that some of the stones mirror the brightest star of the Cygnus constellation - Deneb.

“According to another opinion, Carahunge isn’t an astronomical observatory. It is simply an ancient site, a settlement, which has a status of a mausoleum,” she said.

Director of the Institute of Archaeology and Ethnography Pavel Avetisyan and archaeological expedition team leader Ashot Piliposyan said not a single astronomical tool has been discovered during excavations at the site, and moreover some of the stones also have holes in the lower parts, which aren’t directed at the stars.

Piliposyan emphasized the uniqueness of the monument in the entire Transcaucasia.

Bnorran Historic-Cultural NGO and the Institute of Archaeology and Ethnography signed an agreement on July 30 to join forces.

“It requires studies in all aspects. We discussed  many issues during the signing of the agreement, we even considered that maybe in the future it will be possible to build a museum near the monument to display all materials regarding the ancient site,” Piliposyan said.

Both parties have agreed to suspend excavations at Carahunge until a joint seminar of astronomers, archaeoastronomers, archaeologists, ethnographers, naturalists and many other experts will take place to develop a plan and conduct research, which will lead to a general conclusion.