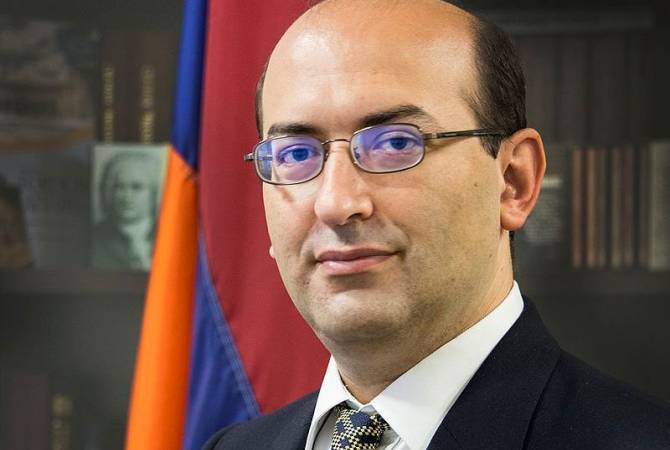 
YEREVAN, JULY 16, ARMENPRESS. Armenian Ambassador to Latvia, Lithuania and Estonia Tigran Mkrtchyan gave an interview to the renowned Latvian magazine The Baltic Times, titled “A common past helped Armenian and Baltic nations to get to know one another”.

Armenpress presents the full text of the interview:

Although Armenia may seem just too far for many to expect to hear any echoes of history reverberating across Armenia and the Baltics, but – what a surprise! – it appears the past has put Armenia, Lithuania, Latvia and Estonia at the same crossroads more than once throughout the centuries. H. E. Tigran Mkrtchyan, Extraordinary and Plenipotentiary Ambassador of Armenia to Lithuania, Latvia and Estonia kindly agreed to speak to The Baltic Times Magazine and bring Armenia closer to everyone here.

-Can you speak a little about how the Embassy of the Republic of Armenia disseminates information about Armenia in the Baltics?

-I hope that the Embassy of the Republic of Armenia plays a significant role in presenting the country in the Baltic states. We organize various events to deepen knowledge and comprehension of Armenia, Armenians and our culture. There are two types of events that we usually organize. Firstly, events that are held more than once, i.e. in various cities in Lithuania, Latvia, and Estonia. For example, such exhibitions as “The Historic Maps of Armenia” and “Armenian medieval churches” or screenings of movies, such as «The Promise» (2017). And some events that are unique and can be held only once.  We are based in Vilnius, but our goal is to be equally visible in Vilnius, Riga, and Tallinn. We spare no efforts to present the best of Armenian music, art, literature and invite the best artists. I would also like to mention that increased media attention to our events is an immense asset in disseminating information about Armenia.

-Can you speak about the Baltic and Armenian trade volumes? What are the trends?

-Armenia and the Baltic states aim to strengthen their economic partnership, especially since the ratification of the Armenia-EU Comprehensive and Enhanced Partnership Agreement. The countries are mainly interested in exporting food products, electric power, and renewable energy equipment, IT and logistics services. I should emphasize that since 2015 the trade volume has experienced a double-digit increase. This year we already have investment projects in the IT and energy sectors. High-added value products have the highest potential and priority for bilateral trade development.

-Why is Armenia worth visiting this year? What exceptional events would you like to mention?

-Armenia has many places of interest for tourists regardless of the time of the year. It is a small but charming country that has a rich cultural and historical heritage including the oldest churches and monasteries in the world as well as breath-taking mountainous landscapes. Especially eco-tourism and pilgrimages attract thousands of tourists to Armenia every year. As far as events are concerned, let me mention more than 40 festivals that are held annually in Armenian cities. For example, wine and food lovers should definitely participate in a wine festival during the Yerevan Wine Days in May or learn how to make the Armenian national dish dolma at the Dolma Festival in May. For those who can’t make it to the Wine Days, there is an alternative option in October, i.e. the Areni Wine Festival. In terms of cultural events, this year is exceptional as we celebrate anniversaries of both the renowned composer Komitas Vardapet and the not less renowned poet and writer Hovhannes Tumanyan, that are also included in the UNESCO Calendar of anniversaries of eminent personalities and important events of 2018–2019. Therefore, most of the cultural events in Armenia are dedicated to these two personalities.

There is also Yerevan’s Golden Apricot International Film Festival in July that brings leading individuals in the film industry and film-lovers to Yerevan. Nowadays, Armenia has become one of the greatest places for jazz lovers to visit, and on the International Jazz Day, every April 30, top jazz musicians come to Yerevan. There are two more significant musical events worth mentioning, i.e. the 15th Aram Khachaturian International (Piano) Festival in June and the Alexander Arutiunian International Wind Festival at the end of May and early June. For those interested in science and education, there is the Sevan Start-Up Summit in late July and early August.

Armenia has become an IT hub in the region and this and other similar events bring leading IT representatives to Armenia. The World Congress on Information Technology 2019 in October (6-9) will be one of the top science events. Of course, the Centennial of my Alma Mater – Yerevan State University in September will be marked as well. I would like to underline also, that in 2018 Armenia hosted its biggest ever international event- the Summit of Francophonie, with delegations from more than 80 countries. The Summit organization was an immense success and it enhanced Armenia’s image worldwide.

-Many Balts savour Armenian cuisine and especially the wine. What Armenian restaurants and wine shops in Lithuania, Latvia, and Estonia would you recommend?

-In most countries, and the Baltic states are no exception, one can taste authentic Armenian cuisine and savour Armenian wine as it is crucial for Armenians all around the world to have local spots of their delicious national cuisine. I usually invite our guests to Armenian restaurants in all three countries. In Vilnius, I would like to mention Achtamar and Plento Grill restaurants, where the food is exceptionally delicious and the aura is very pleasant. Plento Grill is also the place to taste a huge variety of Armenian wine. There is also Ararat, a muchloved chain of restaurants in Vilnius and Siauliai. Close to Vilnius, one can find Araks, also worth visiting.

If you wish to taste the best baklava in Vilnius, then the online sweets store of granatas.lt is the site to order such food in great variety. Also, some of best Armenian bread-lavash, widely loved by Lithuanians, is produced by Kilikija manufacturers.

In Klaipeda Pepper Grey and Ararat are two very good restaurants. In Riga, I would single out Armenija and Erebuni. Also, I like Aragats, a cosy family restaurant in the centre. In Tallinn Kinza and Noy City are both great places. Let me emphasize that all of the above-mentioned restaurants have two very pleasant features - delicious food and warm hospitality.

-What is your biggest pleasant discovery about the Baltics?

-For me, one of the biggest and most welcome discoveries was, of course, the high awareness of the Lithuanians, Latvians, and Estonians about Armenia and Armenians. Probably this has a long history. For example, there were Armenians who took part in the Grunwald (Žalgiris) Battle in 1410, Armenian was also one of the six official languages used for judiciary procedures in the Grand Duchy of Lithuania. In the 19th century, hundreds of Armenians, Khachatur Abovian, and several other future celebrities studied at Tartu. They brought knowledge about Armenia to Estonia as well as took back to Armenia what they learnt here. In the late 19th and early 20th century the great Latvian poet Jānis Rainis and another poet of a later generation, i.e. Māris Čaklais disseminated knowledge about Armenia and Armenians in Latvia. The common past in the 20th century also helped our nations to get to know one another.

And nowadays our fellow Armenians are highly respected within their societies and contribute to the development of their countries also showing every support of Embassy activities. At the same time, representatives of the Armenian communities also preserve their Armenian identity, in which the Armenian Apostolic Church located in Riga plays an invaluable role.