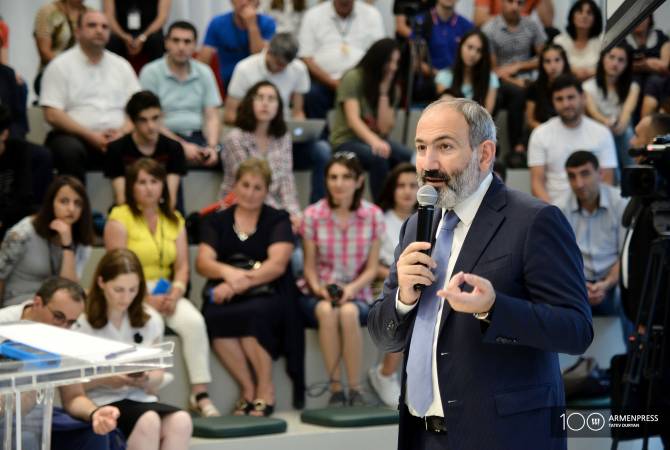 
YEREVAN, JULY 13, ARMENPRESS. Making Armenia an industrial country will solve the demographic problem, Prime Minister Nikol Pashinyan said in his remarks at the COAF SMART Center in Lori province, adding that the Armenian people have that experience.

“We should look at our history and see how it happened that the number of our population has doubled. That was the period when industry developed in Armenia, and our country became an industrial state. That was in the Soviet times, and the authors of that industrial development were our fathers and grandfathers. In that period we had titans such as Hrant Matevosyan, Minas Avetisyan, Martiros Saryan, Yervand Kochar, Vahram Papazyan, Hrachya Nersisyan, Gohar Gasparyan. I want to state that the thinking, the composition of the economy changes a lot in our reality. Thus, the role of such educational centers is unique in this sense that we help our children to believe in themselves”, he said.

The PM stated that Armenia’s industrial development stage is ahead. He expressed confidence that the Diaspora will be more active in this process.

“Do not imagine that we are denigrating the role of businessmen who today carry out very concrete works in Armenia. We have concrete examples. Recently, I made a decision to award Tavush Textile founder Suren Yeritsyan with an order for the services provided to the Homeland. Previously he migrated to Russia, established a factory, had a success, has come from some stage and created an industrial work in the border zone. Pashinyan said during the 2018 revolution the desire to live, win, strengthen and break the cycle of own fate worked.