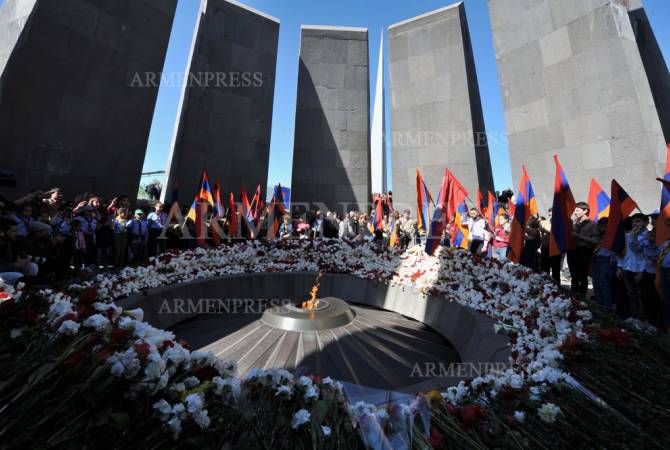 
YEREVAN, APRIL 24, ARMENPRESS. In 1915, the crime perpetrated by the Ottoman Empire against the Armenians was the first genocide of 20th century.  The Armenians worldwide commemorate 104th anniversary of the Armenian Genocide.

On April 24, the country’s high-ranking officials and guests in Armenia will visit the Tsitsernakaberd Memorial to pay tribute to the memory of the Armenian Genocide victims.

The extermination of Armenians in the Ottoman Empire during the World War I is called the Armenian Genocide.

Those massacres were perpetrated by the government of Young Turks in various regions of the Ottoman Empire.

The first international response to the violence resulted in a joint statement by France, Russia and the Great Britain in May 24 1915, where the Turkish atrocities against the Armenians were defined as “a crime against humanity and civilization”. According to them, Turkish government was responsible for the implementation of the crime.

Why was the Genocide perpetrated?

When WWI erupted, the government of the Young Turks adopted the policy of Pan-Turkism, hoping to save the remains of the weakened Ottoman Empire. The plan was to create an enormous Ottoman Empire that would spread to China, include all the Turkish speaking nations of the Caucasus and Middle Asia, intending also to turkify all the ethnic minorities of the empire. The Armenian population became the main obstacle standing in the way of the realization of this policy.

How many people were killed in the Armenian Genocide?

There were an estimated two million Armenians living in the Ottoman Empire before the WWI. Approximately one and a half million Armenians were killed from 1915-1923. The remaining part was either islamized or exiled, or found shelters in different parts of the world.

The first phase of the Armenian Genocide was the extermination of the Armenian population started on April 24, 1915 with the arrest of several hundred Armenian intellectuals and representatives of national elite (mainly in the capital of the Ottoman Empire, Constantinople) and their subsequent elimination. Hereinafter, Armenians worldwide started to commemorate the Armenian genocide on April 24.

The second phase was the conscription of about 60,000 Armenian men into the Ottoman army, their disarmament and murder by their Turkish fellow soldiers.

The last phase is the universal and absolute denial of the Turkish government of the mass deportations and genocide carried out against Armenians in their homeland. Despite the ongoing process of international condemnation of the Armenian Genocide, Turkey fights against recognition by all means, including distortion of history, means of propaganda, lobbying activities and other measures.

On December 9, 1948 the United Nations adopted the Convention on the Prevention and Punishment of the Crime of Genocide, according to which, genocide is defined as an international crime and the signing states are obliged to prevent, as well as punish the perpetrators of the genocide.

The Armenian Genocide perpetrated by the Ottoman government has been documented, recognized and acknowledged by eyewitness reports, laws, resolutions and the decisions of numerous states and international organizations.

There are numerous documents considering the massacres of the Armenian people as a pre-planned and thoroughly implemented act of genocide. Organizations like the Council of Europe, the European Parliament, a number of UN Committees, the World Council of Churches, MERCOSUR parliament and others acknowledged the Armenian Genocide.