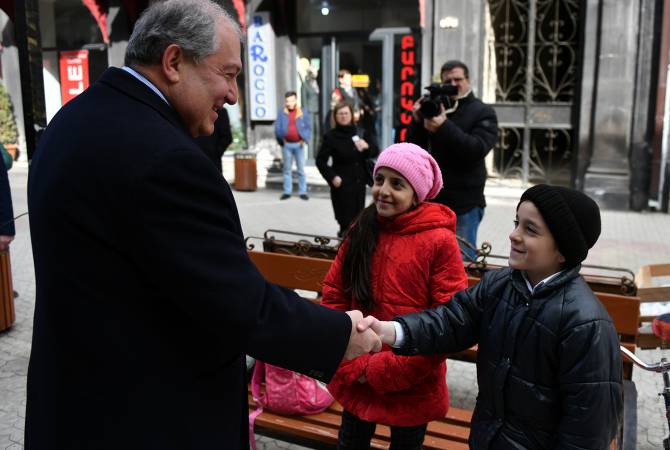 
YEREVAN, MARCH 23, ARMENPRESS. Armenian President Armen Sarkissian has once again visited Gyumri, and the visit was again an unofficial one.

A reporter saw Sarkissian walking the streets of Gyumri on Friday, and asked him to comment on the visit.

“For me Gyumri is home, I’ve come home, and this doesn’t need any particular arrangement,” the president said.

Walking down the Abovyan Street, Sarkissian saw a movie set in action. He approached the production team to find out more about the film, and saw two children, Ani and Manvel, who are child actors portraying two characters in one part. Sarkissian talked to the young actors and invited them over to have tea and dessert at a nearby patisserie-café – Aregak.  Aregak, meaning sun, is an inclusive café that Sarkissian visits very often.

The kids and the production team of the movie were delighted to have the chance to sit down with the president himself.

Sarkissian commended the production of a film about the city, and overall any reference to the culture, history and traditions of Gyumri, once again attaching importance to the city’s revival.

The president then continued touring the city and viewed ongoing construction works.

Speaking to reporters, the president said that Gyumri has the kind of architectural and cultural heritage that even the most developed cities around the world do not have.

“I am trying to achieve Gyumri being recognized also as an international cultural heritage because there aren’t many cities as beautiful as this one. This is a lengthy process but we must pass this path,” Sarkissian said.

He said Gyumri must also be recognized inside Armenia, and domestic visits must increase.

“We all have something to do, both businessmen, scholars and artists. Gyumri must become attractive, as a city of culture, arts, crafts and history. Gyumri isn’t an ordinary city, Gyumri is an extraordinary city”.