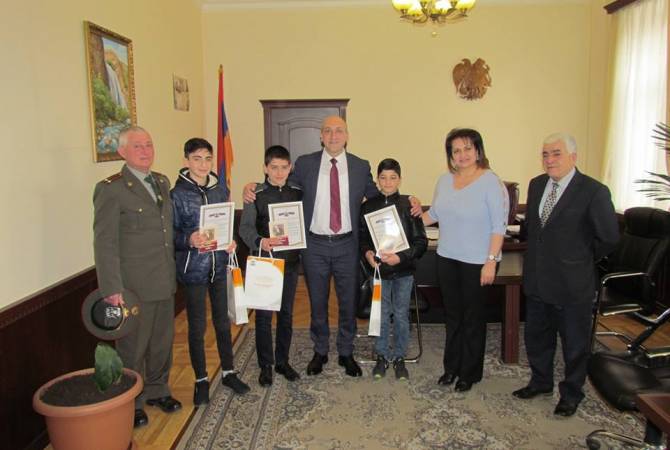 
YEREVAN, MARCH 7, ARMENPRESS. Governor of Lori Andrei Ghukasyan has rewarded the school boys who saved a motorist after the latter crashed into a river.

The incident took place in the town of Vanadzor on March 3.

The initial report about the incident erroneously said that there were two boys involved in the heroic act, but turns out there was the third one.

The youngsters just happened to be passing by when a vehicle lost control and crashed into a river in Vanadzor.  Without even a second of hesitation, the boys threw themselves into the freezing water to save the driver. They pushed the flipped car into a safe position, prevented a fire risk and even gave first aid to the driver and his passenger.

On March 7, the Governor of the province personally invited the boys to a meeting. Also present were the school principal and military education teacher Arkadi Martirosyan. Governor Ghukasyan personally thanked the young heroes for their selfless step.

“I am extremely happy that such courageous boys are being brought up in our province and our city. I am sure your actions will be exemplary for many,” the governor told the boys.

Ghukasyan gave certificates of appreciation and gifts to the three young heroes.

He urged them to do their best at school, achieve great heights in life, be proud citizens of Armenia and serve their knowledge for the development of their country.

19:52, 06.24.2022
2484 views The Chinese Ambassador to Armenia attaches importance to cooperation with Shirak Province in various fields