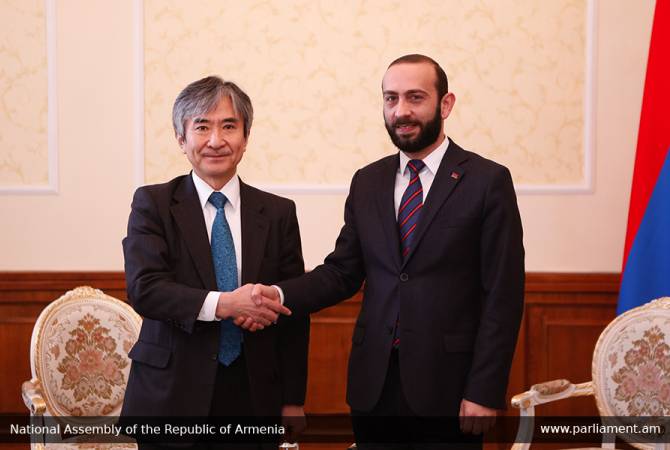 At the meeting Speaker Mirzoyan stated that since the establishment of diplomatic ties the relations of Armenia and Japan are steadily and dynamically developing. He noted that the opening of the Embassies in Tokyo in 2010 and Yerevan in 2015 gave new impetus to the strengthening of the bilateral ties.

The Speaker also touched upon the development of the parliamentary relations and in this context stated that a parliamentary friendship group is being formed at the moment, numerous MPs of the Armenian Parliament are interested in friendship with Japan.

The Speaker of Parliament expressed gratitude to the Japanese government for the assistance provided and programs implemented in various sectors.

In his turn the Japanese Ambassador highly valued the parliamentary relations between the two countries in the recent years.

Jun Yamada was interested in the ratification process of the agreement between Armenia and Japan on liberalization, promotion and mutual protection of investments by the Armenian Parliament, and in response Speaker Mirzoyan expressed hope that the Parliament will discuss the agreement as soon as possible.