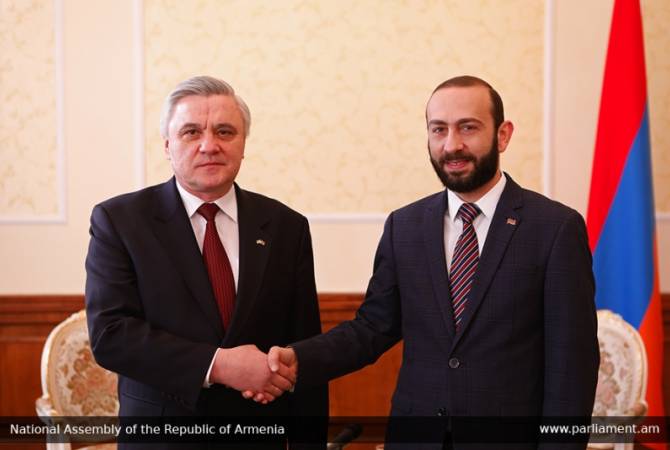 At the meeting the Speaker highly appreciated the Armenian-Ukrainian friendly relations, stating that they serve a firm base for further deepening the bilateral ties. Ararat Mirzoyan highlighted the further development of the inter-parliamentary relations and stated that the upcoming parliamentary friendship group will play a key role in intensifying the bilateral contacts.

In his turn the Ukrainian Ambassador congratulated the Speaker on assuming office and stated that Ukraine is interested in developing mutual relations, adding that his country fully supports the ongoing processes in Armenia. The Ambassador expressed readiness to further develop and expand the inter-parliamentary ties and attached importance to the cooperation at international platforms.

The two officials also discussed a number of programs of bilateral agenda, as well as praised the growth of the trade turnover volumes between Armenia and Ukraine. The sides highly valued the role of the Ukrainian-Armenian community on deepening the relations, as well as in the country’s public, political, cultural, scientific and educational sectors.