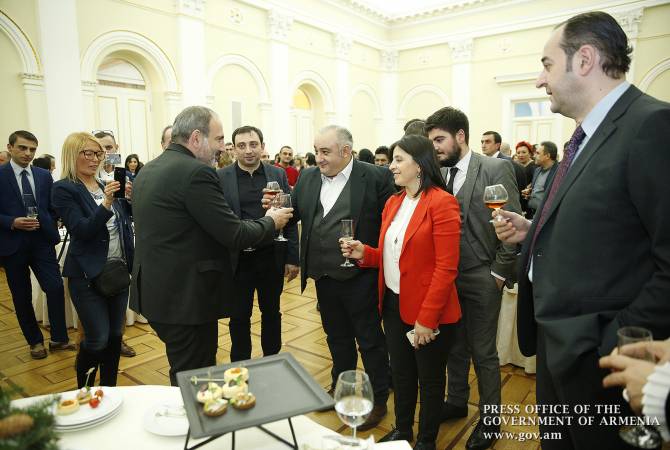 
YEREVAN, DECEMBER 26, ARMENPRESS. A reception was held for mass media representatives on behalf of Acting Prime Minister of Armenia Nikol Pashinyan on December 26. Pashinyan congratulated the media representatives on New Year and Christmas wishing them health, happiness and success, ARMENPRESS was informed from the official website of the Prime Minister of Armenia.

“First of all let me thank you for your work done in 2018, because I think that the role of media was extremely great in the non-violent, velvet, popular revolution”, Pashinyan said in his speech, adding that the press has never been so free in the history of the 3rd Republic of Armenia than it is now.

“You can be confident in one thing. The Government of the Republic of Armenia will spare no efforts for protecting and developing freedom of speech and the press, and of course, we expect an effective cooperation with media representatives”, Pashinyan said, once again congratulating and thanking for the works done in 2018 and hoped that in 2019 the works will be more productive and “the media will become a very productive tool for supervising the activities of the Government”.