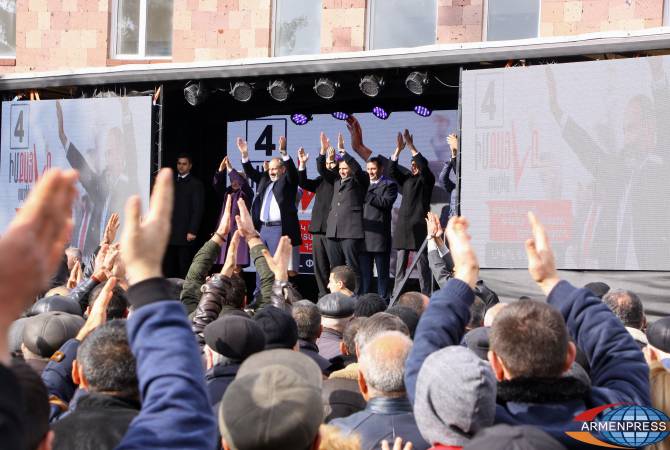 
YEREVAN, DECEMBER 10, ARMENPRESS. Soon after the preliminary vote count results of the general election of Armenia were released by the country’s Central Electoral Commission, news media from around the world shifted their spotlight on Armenia.

“Armenian citizens created a revolutionary majority at the parliament,” the British daily newspaper quoted Pashinyan as saying at his bloc’s HQ after the first results were published.

Sputnik News noted that the Republican Party of Armenia, the former ruling party, for the first time failed to cross the 5-percent threshold to get into the country's parliament, garnering only 4.7 percent of the vote.

Nearly 40 foreign news media have accredited at the foreign ministry to cover the general election.

"After the elections, we will be developing Armenian democracy and make an economic revolution happen," France24 quoted Pashinyan telling reporters after casting his ballot on December 9 in Yerevan.

The newspaper notes that the former ruling party “suffered a massive defeat and came in at just over 4 percent, according to the early results. “

The Turkish press also covered the election, with TRT World quoting Pashinyan as saying : "An economic revolution is our top priority," after voting.

Iran’s PressTV noted Pashinyan’s “landslide victory”, that enabled the premier to “consolidate his authority months after he rose to power”.

The Central Electoral Commission of Armenia has released the preliminary results from all 2010 polling stations in the country of the general election vote.

According to the CEC, caretaker Prime Minister Nikol Pashinyan’s My Step Alliance has won a landslide victory with 70,43 % - with 884,456 votes.

According to preliminary information the turnout was 48.63%.